The Eurozone crisis and South East Europe: Recovery or illusion?

In late January, the PEFM seminar series was treated to a data-rich and fascinating account of the crisis experience of South East European states.  Adam Bennett of St. Antony’s College and Peter Sanfey of the European Bank for Reconstruction and Development (EBRD) presented the book they co-authored with Russell Kincaid, formerly of the IMF and the late Max Watson, also formerly of the IMF and founding director of PEFM. 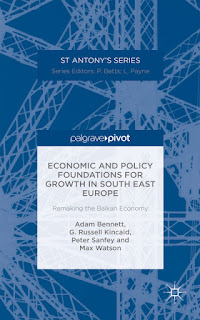 Economic and Policy Foundations for Growth in South East Europe (Palgrave, 2015) reviews the experience of crisis in the ten South East European economies and argues for renewed commitment to reform to ensure sustained prosperity.

The South East European (SEE) states comprise Albania, Bulgaria, Romania and the seven successor states of former Yugoslavia. Bennett outlined three distinct phases of development in this region since the onset of “transition” in 1990. The first ten years he characterized as the “valley of tears”, as countries variously underwent the dismantlement of economic systems and then rebuilt them, or were ripped apart by conflict. The second phase comprised the boom years of the first part of this century through the onset of the global economic crisis at the end of 2008, when all countries managed to achieve remarkable (and too good to be true) growth rates—the “sunlit uplands” of peace and fruition of reform. The final phase, where SEE arguably remains today, was characterized as the “wilderness years” of post crisis recession followed by stagnation.

Though there were of course idiosyncrasies in their economic trajectories in the build up to the crisis and stagnation of 2009-2014, the trends across the region are instructive. On the basis of detailed country-level data, Bennett described the emergence of a massive savings gap in these economies during a boom period that stretched from 2000 to 2008.

The rapidly growing current account imbalances that emerged as investments outstripped savings were financed largely by inflows of foreign direct investment, especially from neighbouring European states. As the boom years progressed, however, shorter-term flows made up increasingly larger shares of foreign inflows, bringing with them the possibility of volatility.


With the onset of crisis, these short-term flows ground to an abrupt halt, sparking recessions across the region. By the end of 2013, capital amounting to 20.5% of GDP had been withdrawn from the SEE economies. The consequences could have been much more dire, however. Bennett argued that the even larger outflows were only prevented by the Vienna Initiatives, a series of agreements involving SEE governments, European cross-border banks and international financial institutions that sought to prevent large-scale withdrawal of capital.

Not all countries in the region were equally affected by the crisis. Those with more flexible exchange rates were better able to offset losses in competitiveness, while countries that had pegged their currencies to the Euro were left only with the tools of internal devaluation, often requiring painful domestic adjustment.

Bennett’s reflections on the failure of both IMF officials and country experts to sense the oncoming crisis offer insights that transcend the region. Rapid growth rates and an environment of enthusiasm obscured the instability of the underlying fiscal conditions and structural imbalances. Policy-makers found it difficult to justify raising taxes and cutting spending in an optimistic economic environment. Bennett pointed out that similar blinders prevented recognition of the fiscal weaknesses in Western Europe.

The structure and composition of the banking sector of SEE economies contributed significantly to their vulnerability in the crisis. In his portion of the talk, Peter Sanfey presented the findings of the research on the financial sectors of SEE states largely conducted by Watson and Kincaid. Foreign banks, especially Austrian and Italian ones, dominate SEE banking sectors. In some countries, over 80% of the sector is foreign-owned.

A defining feature of the economies of the region is their ‘Euroization’. Credit is extended in Euros, or in some cases Swiss franc, exposing borrowers to substantial foreign exchange risk. In Croatia, Serbia and Bosnia and Herzegovina over 60% of loans are in foreign currency. The implications of this pattern of lending became very clear in early 2015 when the Swiss national bank abandoned the currency ceiling and allowed the Swiss franc to rapidly appreciate. The cost of loans denominated in Swiss franc, pervasive across the regions, rose dramatically, in some cases by up to 20%.

Given the inflows of capital in the boom years, and the risks associated, several SEE countries experimented with macroprudential measures in the run up to the crisis 2003-2008. Sanfey explained that a review of these interventions found that they had short-term benefits, but these faded over time. Furthermore, Sanfey shared the authors’ finding that the success of macroprudential measures relied on sound underlying fiscal policy, as had been the case in Bulgaria.

Looking forward, Sanfey drew out the implications for the SEE economies of the European Banking Union. Though it strictly applies to EU members, it will be relevant even for economies outside the EU, especially given the large presence of European banks in SEE countries. Late in 2015, in the spirit of the Vienna Initiative, the EBU signed a memorandum of understanding with SEE countries to facilitate the exchange of information, which is especially pertinent for home-host regulator communication in these markets that are so dominated by foreign banks.

Finally, Sanfey shared the dispiriting but intriguing findings of the EBRD’s “Life in Transition” survey. Among other things, the survey measures citizens’ confidence in institutions. Over the period between 2006 and 2010, trust fell across the board: citizens have less faith in the presidency, parliament and political parties, and also banks, the financial system and foreign investors. When asked about the key determinant of individual success, respondents stressed the importance political connections. The experience of economic transition and the recent crisis has evidently left citizens disaffected and frustrated, distrustful of both political and economic institutions. This dampens the prospects for future reforms.