In week 2, the European Studies Centre (ESC) Visiting Academics’ Seminar Series welcomed Basak Kale (Middle East Technical University, Ankara). Kale gave a talk on the recent refugee protection crisis, which has significant political and economic repercussions for the European Union (EU) and its member states. Kale argued that the agreement might reenergise the cooperation between the EU and Turkey and can keep the accession negotiations alive. 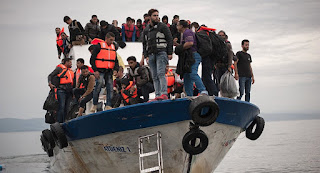 Dr Kale started her presentation by explaining the recent developments such as the stalemate in Turkey-EU relations in the post-2005 period, the EU’s increasing internal focus due to constitutional referendums, integration of the new member states and the Eurozone crisis, and the onset of the Syrian civil war and demonstrated how those events culminated in the EU-Turkey action plan for the management of irregular migration. The Syrian civil war is estimated to create more than five million refugees and more than seven million internally displaced persons. In the influx of refugees, Turkey and the EU member states have commonly been challenged by the management of refugees and the humanitarian crisis it gave rise to. The UNCHR anticipated that there were 2.5 million refugees in Turkey by 2015.
Kale explained that the high number of refugees in Turkey led to several political, economic, and institutional challenges. The country currently tries to address the issues such as the integration of refugees, provision of healthcare and education services, employment requirements, and broader political integration and citizenship questions for the refugees. Moreover, it is financially challenged in meeting those needs. While the country officials initially used the national resources, more recently they called for international/European assistance. The country also tries to develop the necessary institutional framework as a ‘new’ host country for refugees (Turkey did not previously receive large number of refugees). In fact, the law on Foreigners and International Protection (LFIP) was adopted in April 2013 by the Parliament, which is broadly in line with the EU Acquis. Also an undersecretariat under the Prime Ministry is formed.

Kale argued that while Turkey is pressed due to financial, institutional, and political challenges, the EU countries are also under pressure. There is an increasing sense of panic about how to handle the refugee crisis. Moreover, there is a tension between international human rights obligations and the principle of state sovereignty. On the one hand, the EU countries have international obligations regarding accepting the refugees and granting them the refugee status. On other hand, the sovereignty principle dictates that states are able to decide whom to let in their countries. Within this context and largely to address this tension, Dr Kale explained, the EU has been implementing a policy of ‘externalization’ and concluded a readmission agreement with Turkey on 16th December 2013. The agreement is followed by the EU-Turkey Action Plan on combatting irregular migration in October 2015. The plan envisages cooperation on border controls to manage irregular migration, assistance to refugees, financial support to Turkey, and visa liberalization for Turkish citizens.

According to Kale, the plan is critical for the future of Turkey-EU relations as well as Turkey’s democratisation journey and the EU’s use of strategic thinking in its foreign policy. She argues that Turkey used the management of irregular immigration in order to revitalise its relationship with the EU and to reopen the accession negotiations. At least in the short-tem, Kale argues, the plan might keep the relationship alive. Moreover, the plan signifies a transformation in the foreign policy of the EU in the direction of more strategic thinking. The EU made a strategic decision in concluding the agreement. Finally, the plan gives a higher leverage to the EU on Turkey and might help addressing some of the vulnerabilities in the democratization and security framework of the country. Dr Kale concluded on an optimistic note that the plan can reenergise the accession talks and Turkey-EU relations.
Posted by SEESOX at 16:06