Entering through the back door: China’s interests in South East Europe

On February 4, SEESOX hosted a seminar entitled “Entering through the back door: China’s interests in South East Europe”, with speakers John Farnell (former EU visiting fellow at St Antony’s College) and Rana Mitter (Director, China Centre in Oxford) and chaired by Othon Anastasakis (SEESOX). Farnell in his talk focused on China’s fast global rise and its inclination for long-term strategic planning as a world power. For China, South East Europe is not just a back door to Europe but very much a front door, which is proven by recent diplomatic and economic activity. South East Europe fits into the overall strategic planning of China’s two global routes which end in Europe: the Silk Road economic belt through Central Asia, and the maritime belt through the Suez Canal. China has particular interest on investment in infrastructure and energy (and less on manufacturing) and is creating special relations with some SE European states: with Serbia there is an interest in building a high speed rail from Belgrade to Budapest and there is rapid trade growth; with Greece there is ongoing investment in Piraeus which has become the 4th busiest port in Europe, increasing interest in the port of Thessaloniki and planning for the building of an airport in Crete; and with Turkey where there has been rapid trade growth and cultural exchanges and the country is key to the Silk Road Economic belt; at the same time, there has been an uneasy rapprochement between Erdogan and China since 2012, also because Turkey itself is a rival emerging power in the region.
Read more »
Posted by SEESOX at 23:02 No comments:

The second seminar in the series Global South East Europe in a multi-polar world, “Energy Politics: Empowerment or dependency” took place on 28 January. 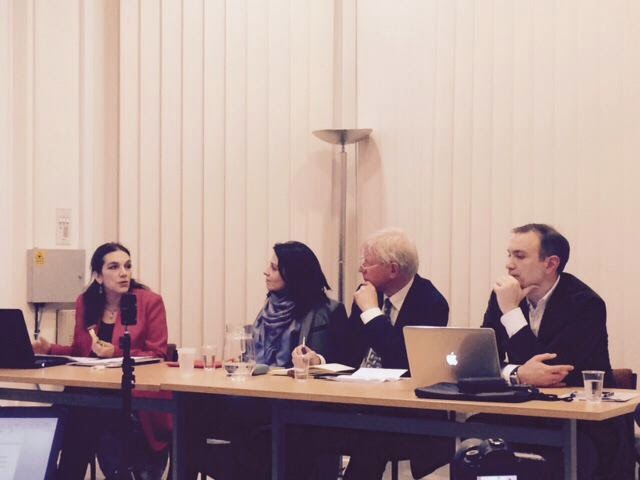 Konstantinos Filis (Institute of International Relations, Athens) spoke about trends in the European gas market, Russian-EU relations and Greece. The market was down by 15% compared with 2010. Demand was reduced by the economic downturn. The emphasis was on diversification (reducing dependence on Russia), conservation, energy saving, indigenous production, interconnectivity of networks and development of infrastructure. There were doubts about the dependability of Russian supply, particularly in the light of events in the Ukraine, but 17 EU member states still relied on Russia for over 80% of their imports. The Turkish Stream would not replace South Stream in terms of quantities, but would weaken Kiev’s transit role, and strengthen relations with Turkey. For gas coming into the EU, it might run into objections on the lines encountered by South Stream, but Russia would expect the EU to sort those out. In the short term SEE was unlikely to reduce dependence on Russia, but would have better access to alternative supplies by 2018/9. Greece needed new investment in infrastructure, but the picture was clouded by the new government and early decisions on privatisation. Generally, lower prices meant reduced interest in deep off-shore fields, including in Greece.

Romania’s new German President: Where do we go from here?

On 27 January, SEESOX organised, in cooperation with the Department of International Development, a lunchtime seminar on “Romania’s new German President: where do we go from here?” the panel of speakers was made up of Laurentiu-Mihai Stefan, from the Romanian President’s Office, Michael Taylor, of Oxford Analytica, John Beyer, of St Antony’s, Corneliu Bjola of ODID, and Jonathan Scheele, of St Antony’s.

In November 2014, Romania elected a new President in the second round, pitching the current Prime Minister, Victor Ponta, of the Social Democratic Party, against Klaus Iohannis, of the National Liberal Party, an ethnic German and Mayor of the Transylvanian city of Sibiu. The election results were heavily influenced by a massive turnout of the (mainly young) Romanian diaspora, queuing all day outside embassies across Europe to vote – and in many cases failing to get through the door before the polls closed. And, in their frustration, they used social media to encourage relatives and friends back home to vote against the current government. So what does the election of this – relatively – new figure in Romanian national politics, not a Romanian ethnic, though married to one, mean for the next five years – or ten if he is re-elected for a second term – in Romania?