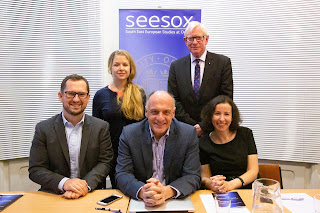 Anastasakis began with an overall introduction to the Seminar Series, which sought to look at geopolitics from a multidisciplinary viewpoint. He recalled the series four years earlier on a similar theme, wondering whether we were now seeing the return of geopolitics with a vengeance. This series would focus on three categories of concern: the role of external actors; new threats common to states; and, internal regional security threats. He highlighted three outdated assumptions: that actors were unified – this was no longer the case for the US, the EU or even within countries; that international security had to be based on territorially defined borders – challenges were increasingly transborder and shared; and that the actors were just states –in fact they now also included economic entities, non-governmental bodies, civil resistants and even migrants. 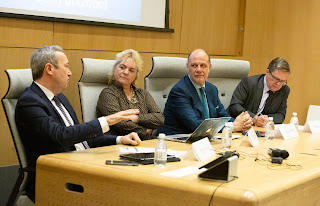 Conference of the European Political Economy Project (In association with SEESOX)

On 23 January 2020 the European Political Economy Project (EuPEP) of the St. Antony’s European Studies Centre (ESC) hosted a conference that looked instead at monetary and financial issues for those countries that are not at the core, i.e. have not (yet) adopted the Euro—defined as the EU “periphery” in this context. Much research on EU integration looks at the “core” EU member states, defined here as those that have adopted the Euro as their currency, and focuses on them in analysing the speed and priorities for taking forward the European project. This conference sought instead to look at the policy choices and experiences of the countries at present not in the core.

The conference took as a starting point that “one size does not fit all” as regards countries’ monetary and financial management within the EU, and that seeking to fit all member states prematurely within the same shoe may undermine the stability not only of that member state but also the EU as a whole. Early inclusion of Italy and Greece, for example, has likely worsened the economic performance of both countries over the past decade, with adverse knock-on effects on the rest of the EU.