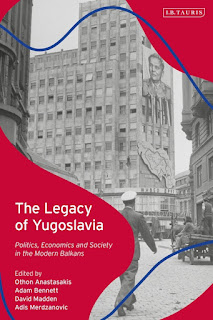 On 24 February, Ivor Sokolic (LSE), Ljubica Spaskovska (Exeter University) and Milica Uvalic (Perugia University) spoke at a SEESOX webinar on this subject. All had contributed to the volume “ The Legacy of Yugoslavia: Politics, Economics and Society in the Modern Balkans”, (I.B.Tauris 2020) co-edited by Othon Anastasakis, Adam Bennett, David Madden and Adis Merdzanovic. The book concentrated on continuities and discontinuities between former Yugoslavia and the successor states. Othon Anastasakis and Adis Merdzanovic co-chaired the session.

Ivor Sokolic addressed civil society, with case studies on Croatia and Serbia. Civil society provided checks and balances on nascent democratic states and institutions. It was an advocate of human rights and freedoms, and contributed to the deepening of democracy. The emergence and existence of civil society provided the true test of discontinuity. In Croatia, the effects on transitional justice were mixed: civil society both supported and opposed democratisation. The key insight was the role that the legacy of ethnic conflict played in leading to these diverging outcomes. In Serbia, civil society was the key political battleground since the collapse of Yugoslavia. It was similar to other civil societies in Central and Eastern Europe but weaker. It was more of a nascent political society than a civil society. Discontinuity from Yugoslavia was evident, but so was the shadow of the legacy: dissidence and the legacy of eg the Croatian Spring was a clear example of continuity. In Croatia and Serbia, there was a shared legacy of conflict and slow transition. Civil society both challenged and supported democratisation.

Ljubica Spaskovska focussed on institutional memory, and the legacies of Yugoslavia’s non-aligned multilateralism. Institutions and larger social groups (nations, governments, churches etc) did not necessarily share a common memory; but tended to make one for themselves with symbols, texts, images, ceremonies etc. But they could also unmake themselves, in the case of the states of former Yugoslavia by losing sight of important memories. The recent rediscoveries of the Yugoslav internationalist, non-aligned legacy reflected different and often conflicting ways of engaging with and making sense of the past. There was selective appropriation and often an acute lack of awareness of and knowledge about concrete policy operations and achievements. Non-alignment had not just been diplomatic, but focussed strongly on economic development and social justice: this tended to be forgotten now. The Serbian elites had tried to revive a neo- Titoist legacy of independence but it was tokenistic.

Milica Uvalic commented that this volume on continuities was unique. She would look at transitions in the economies. Each successor state had its own transition/trajectory/speed/content. In 1989 Yugoslavia was the most reformed socialist economy with its own trademark contributions on self-management and non-alignment. More than 50% of its trade was with the West. Thereafter the successor states went their own way. Slovenia had many advantages including political stability, a strong export position and early support of the EU. It had adopted a gradualist pattern of transition, and retained vestiges of the previous economic model including workers’ participation. Elsewhere, conflict delayed progress; but once they were able to do so the other states turned against the previous economic model, and legacies of self-management were dismantled. The outlook was not very positive; economic expectations had not been fulfilled, there was disappointment with the EU, and young people (especially the educated ones) were leaving.

The Q&A session continued discussion of many of the issues featured above: especially the role of memory; the continuance of a post-Yugoslav space (for example Kosovo and Montenegro directing the majority of their exports to former Yugoslav countries, music crossing boundaries, and war veterans collaborating across former lines of conflict); and the various roles of nationalism, asylum seekers and foreign economic advisers. Overall, the terrible 1990s had tended to destroy the distinctive Yugoslav models, while the priority of EU membership had eclipsed non-alignment.