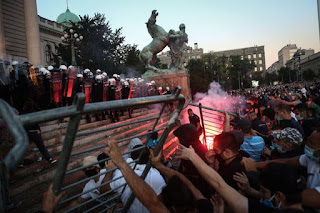 The speakers shared an understanding that protests can have important impact in several areas, namely:
However, it is often very difficult to identify the contribution of protests to developments in these areas. A careful examination of cross-country experience, as presented in this seminar, is essential to distinguish what are the essential conditions for effectiveness.

Dolenec (University of Zagreb) provided evidence from Slovenia, Croatia, and Serbia. Especially in the first two countries, the “narrative” of a quiescent population was contradicted by a lively scene of protests, especially by public sector unions and student groups. The student initiatives in particular are noteworthy because they reflect the concerns of young adults with no direct memories of Yugoslavia and state socialism. They tend to have a New Left agenda addressing green issues, participatory democracy, and local concerns, as expressed in the “Right to the City” movement. Protests in Slovenia and Croatia were able to link in to existing structures and in due course achieve entry into parliament. In contrast, electoral arrangements and other factors have made it much harder for “outsiders” to enter the Serbian parliamentary system.

Milan (Scuola Normale Superiore) told a similar story for Bosnia Herzegovina, where demonstrations by laid-off workers in 2014 and the heavy policy response triggered wider protests and the establishment of local popular councils (known as “plena”). This widespread movement had limited impact on central government or economic structures, but did allow the workers to reactivate their plant—with much local volunteer effort—and induced the authorities to reduce perquisites for officials and ex-officials. The reopening of the National Museum is one marker of the success of efforts to revitalize and democratize urban spaces.

Rone (University of Cambridge) argued that protest movements in Bulgaria in 2013 and 2020 and in and Romania in 2013 and 2017 had relatively little impact, in part because of the weaknesses of existing networks and NGOs. These protests were concentrated in the respective capital cities, and core participants were drawn from the relatively affluent. Also notable was the absence of cross-border support, in contrast to what was seen in South Western Europe and especially Spain and Greece. Perhaps partly for historical reasons, perhaps partly because Southern European countries regard each other as economic rivals, movements in Bulgaria and Romania were essentially isolated.

Smilov (University of Sofia) pointed out that the protests in Bulgaria did lead to the removal of officials accused of egregious corruption, and the establishment of three new parties, which are expected to enter parliament in forthcoming elections; the Bulgarian parliamentary system has traditionally been open to new entrants. There seems to have been a shift in public opinion to be less accepting of the abuse of state power to harass opponents of the government of the day. Moreover, expressions of support from the European Parliament (and recently from the US Senate) for anti-corruption efforts have been encouraging and precedent-setting. However, the government did not fall, and this resilience may reinforce the status quo and lead to resignation rather than an invigorated civil society.

A lively discussion, chaired by Barton Hronesova, followed the presentations. It was remarked that existing elites sometimes mobilize popular movements to reinforce their own position. The veterans association in Croatia is a highly effective civil organization with much political clout; the threat of protests by its members is enough to protect their interests. Protests by the women’s movement and by pensioners have the potential to become more prominent in the Balkans.

In conclusion, the speakers showed that the main impact of protests in Balkans is often at the local and “micro” level; attention should not be directed exclusively at possible changes in central government. But having any impact requires a conducive environment and structures that can sustain and direct the energy of a protest movement into achieving specific objectives; otherwise, protests may be full of sound and fury but leave a legacy of frustration.