After Başaran’s introduction of the author and the book, Lea Ypi read the first few pages to the audience and then provided some historical context. She explained that the part she read takes place in December 1990 - one year after the fall of the Berlin Wall and that one of the reasons why Albania was not immediately touched by the events taking place in other parts of Eastern Europe at the time was the fact that it had a peculiar communist history, namely a history that made it believe that it was the only truly communist country in the world. This self-understanding was derived from being one of the two countries in Europe – the other one being Yugoslavia - that had liberated from the Nazi fascist occupation without help from either the Allies or the Soviets. The idea of living in a country that stands up to super powers had a central role in the main character’s identity as a child as well, believing that she is part of the only truly free country in the world because all of the others have sold out. Yet, during the time in which the changes in Western Europe reach Albania and economic protests turn into political protests, the character discovers via different responses to the protests that the two points of view that she has always assumed were somehow aligned with each other – the one of her family and the state – were in fact pulling in opposite directions. This occasion triggers a re-visiting of all other occasions of unalignment and turns into a coming of age story of the discovery of truth about freedom and non-freedom in which the character has lived both as it applies to her family and the state. At the same time, the process of self-discovery and trying to understand what freedom actually is characterizes not just the character but the country as well. Freedom, which is the central concept that animates all of the dialogues and conflicts in the book, often appears as an ideal, as an illusion and disillusionment. Through the relationships between the child and the parents, and the parents and the society, the book portrays different understandings of freedom at play, both from an institutional perspective as it is captured by the respective ideologies of two different systems, but also as a kind of moral ideal that people still believe in regardless of how it is actually captured by these different ideologies. The author noted that the reason why she chose this format, with a lot of dialogue and conflict within and between characters, was to draw attention to the agency of people, which they exercise by making moral decisions and trying to find the truth even in very constrained and oppressive regimes.
Read more »
Posted by SEESOX at 21:45 No comments:

Panel 2: Security challenges within the region

Dimitar Bechev (Oxford School of Global and Area Studies) cited three pieces of evidence of a new multipolarity. The first is obviously the war in Ukraine, where key regional players are not taking sides. The second is the pandemic, where China’s role in medical supplies to the region is salient, despite the EU’s doing the heavy lifting. And the third is the current role of Turkey, which has evolved from an EU candidate to a bona fide independent regional player. Unsurprisingly, regional elites are seeking to leverage the new geopolitical situation for external support, domestically or for neighbours, or to scare the West. This game-playing—of which Putin is a master—has historical precedents (e.g., Tsipras’s unsuccessful bid for Russian support to improve Greek bargaining power with Brussels). A main point here is that, in the region’s small countries, all politics continue to be local. Twenty years of EU reform efforts have not changed local elites’ incentives to maintain a lucrative independence and resist changes to the status quo.

Milos Damjanovic (Balkan Investigative Reporting Network) took on the question of whether Serbia is acting as a Trojan horse in the region. He argued that Serbia will ultimately align with the West, although pro-Russian sentiments in Serbia are at an historic high, and Serbia has not imposed sanctions. Historically, Serbia has more often been pro-western, with the pendulum swinging as national interest dictates. Current Russian support dates from the NATO bombing of the 1990s. Even then, Serbia remained pro-EU and kept Russia at a distance until Western recognition of Kosovo forced Serbia to rely on Russian support. The dilemma is a difficult one for domestic politics: how can Serbia side with the countries that invaded its territory, while condemning Russia for invading Ukraine? Vucic would prefer to be invisible (‘crawl under a stone’) but in the end, if Serbia has to choose sides, it will align with the West. Most Serbs want to join the EU. Damjanovic agreed with Bechev that a ‘waiting room’ for EU accession, or other second-tier membership, would carry a real danger of allowing regional elites to continue milking the system without pursuing reforms.
Read more »
Posted by SEESOX at 16:01 No comments:

South East Europe in the shadow of the war in Ukraine: Part 1

Panel 1: The relationship between the EU and the countries of the region 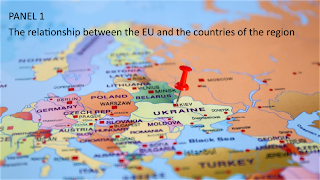 The main event at the SEESOX Twentieth Anniversary Day, on 8 June 2022 was a pair of panels looking at the implications of war in Ukraine for the region.

The first panel was chaired by David Madden (SEESOX); it discussed the region’s changing relationship with the EU, consequent on the war in Ukraine.

Michael Emerson (Centre for European Policy Studies, Brussels) began by recalling that the Commission would be presenting three Opinions next week, on the accession applications by Ukraine, Moldova, and Georgia; the European Council would discuss them on 23 June. Since the applications had been lodged, both President Macron and European Council President Michel had put forward proposals for involving new states in a form of political community, in the latter case as a complement to accession, while the former was more ambiguous. These applications were reviving interest in West Balkans enlargement, where CEPS had put forward a template for “staged accession”. The European Council would have to resolve a complex simultaneous equation, addressing the new three, the western Balkan six, and EU internal organisation. As regards the applications themselves, CEPS saw all three countries as broadly on a par with most of the West Balkans candidates, but ahead of Bosnia and Kosovo. The war created a moral obligation for the EU to react positively on Ukraine, as things could not wait until after the war; but granting candidate status could not be a short cut for regular accession negotiations thereafter. Moldova, while economically weak, had recently shown remarkable progress on the political front. Georgia was a paradox; while its economy was in better shape than the other two, there was growing evidence of state capture and of press freedom restrictions; these should disqualify it from candidate status.
Read more »
Posted by SEESOX at 15:59 No comments: 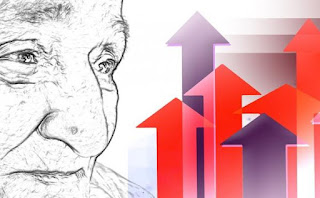 On June 1, 2022, a SEESOX panel, chaired by Kristijan Fidanovski (Department of Social Policy and Intervention, Oxford), examined the causes and consequences of Southeast Europe’s rapidly ageing population. While all European populations are graying, the Balkans are ageing in the context of absolute population decline over the last few decades, with potentially serious ramifications for the intergenerational social contract in South East Europe.

Arjan Gjonça (Department of International Development, LSE) took stock of the three drivers of population ageing: low fertility, growing life expectancy, and net emigration. Fertility is much below the replacement rate (1.3 to 1.8, instead of 2.1 births per woman)—despite earlier marriages and first births than the EU average—and regional life expectancy is quite long. However, it is clear that the main driver of distortion in the population pyramid is the significant net emigration from the region in the past thirty years. In Albania, the most extreme case, one-third of the 1989 population has since emigrated.
Read more »
Posted by SEESOX at 15:56 No comments:

The EU as a State-Builder in international affairs: The case of Kosovo 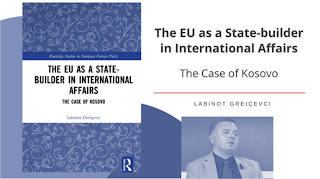 On 18 May 2022, SEESOX hosted the first of its Trinity Term Seminars, in hybrid format, on The EU as a State-Builder in international affairs: The case of Kosovo. The speaker was Labinot Greiçevci (Research Institute of Development and European Affairs, Pristina) with Belina Budini (European University of Tirana, and SEESOX) as discussant. The session was chaired by Richard Caplan (DPIR, Oxford).
Greiçevci was presenting his recently-published book, bearing the same title as the seminar, which looked at the role of the EU, and other international actors (USA, NATO, Russia, China, and Turkey) in state-building, using Kosovo as a case study, but looking also at other countries in the region, each of which had its own particularities. The book was based on research begun in 2006 and continued at various points through to 2021; it involved, among other techniques, elite interviews in Kosovo, Brussels and Berlin, including local and international officials, CSO reps, media and academia. He had developed a ranking for failure or success in state-building efforts running from 1 (failure) to 5 (complete success).

Recalling relevant theoretical perspectives – Liberal Peace Theory (LPF) and Normative Power Europe (NPE) – his work had attempted to combine both, looking at diffusion mechanisms, both overt (physical presence/political role) and through transference (technical assistance, funding). His analysis distinguished two separate stages, from 1999 to 2008, prior to Kosovo’s independence declaration, and from 2008 to 2020, looking at both tangible and normative impact in the first stage, and only at normative impact in the second (since tangible impact was complete with institutions in place after independence). In both stages, he had distinguished between the key and the assistant role of the EU and other actors.
Read more »
Posted by SEESOX at 11:24 No comments: