A team from SEESOX, with invited guest speakers, visited Athens for a series of events from 22-24 October, 2018. This was generously funded by the Public Diplomacy Division of NATO. 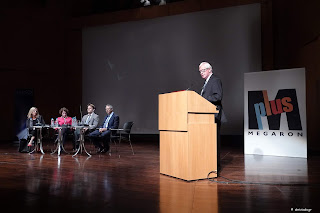 The centrepiece of the visit was a presentation at the Megaron on 23 October. Richard Caplan, Professor of International Relations at Oxford University, addressed “Contemporary Global Security Challenges”. Lucas Kello. senior lecturer in International Relations at Oxford, and Director of the Centre for Technology and Global Affairs, spoke on “Evolving Cyber Threats”. Ino Afendouli, Programme Director at the Public Diplomacy Division of NATO, presented on “The new security environment: The View from NATO”. Marilena Koppa, a former MEP, and now an Associate Professor at the Panteion University, and currently an Academic Visitor at St Antony’s College, Oxford, covered “Europe and Common Security and Defence Policy.” The session was chaired by David Madden.

Beyond the economic crisis: Greece’s other existential challenges

Kyriakos Pierrakakis, Director of Research at the Greek Think Tank diaNEOsis since 2016, gave the first SEESOX seminar of the Term on 17 October on the subject “Beyond the Economic Crisis: Greece’s other Existential Challenges”. Manolis Pratsinakis chaired.

As background, Pierrakakis noted that 1.5% annual growth for Greece was insufficient given that Greece is bound by the last memorandum to maintain a surplus target of 4.5% of GDP over the medium term. She needed 4%. Greece had required 3 bail-out packages to the one apiece for Cyprus and Ireland. There were opportunity costs to this, and Greece had to catch up.

Turning to the challenges, the first was a) demography. Greece’s population in 2011 was 11.1 million. This had declined to 10.7 million, and was still declining. There were more births than deaths, and sizeable emigration: approximately 450,000 emigrated, a large part of which concerns young and educated Greeks. Overall Greece was likely to lose 2 million people by mid-century. This had consequences for pensions and economic growth. There was also youth unemployment and over-reliance on family. Immigration policy needed to be rethought.
Read more »
Posted by SEESOX at 19:23 No comments: