Majoritarian futures in Europe and beyond 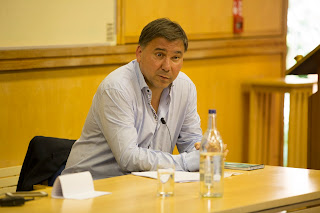 Ivan Krastev, a political scientist and a renowned public intellectual, who is also the Chairman of the Centre for Liberal Strategies in Sofia, gave the SEESOX Annual Lecture on 24 May 2017. Entitled “Majoritarian futures in Europe and beyond”, the lecture was chaired by SEESOX director Othon Anastasakis.

Krastev’s lecture kicked off with Jose Saramago’s 2005 novel Death with Interruptions, which tells the story of a country where people suddenly stop dying and death loses its central role in human life. Krastev likened this story to the West’s experience with globalization, a dream that turned into a nightmare. Suggesting that what we are witnessing worldwide is a revolt against the progressive post-1989 liberal order - defined by the opening of borders for people, capital, goods and ideas - and which takes the form of democracy’s revolt against liberalism, Krastev went on to dissect Francis Fukuyama’s article “The End of History.” Fukuyama had presented the victory of the West in the Cold War as one delivered by history itself. According to Krastev, Fukuyama’s piece captured the zeitgeist well; but one aspect was missing in his famous article. He talked about the free movement of capital, of goods and of ideas, but not of people, at least to the extent that we are experiencing now. The reason for this was, Krastev claimed, Fukuyama’s belief in the resistance of democracy. Fukuyama had believed that people would not migrate because democracy would create favourable environments in their homelands. But this turned out not to be the case. Today, poor and dysfunctional countries had become places in which it is not worthwhile to live, while Europe had neither the capacity nor the will to open its borders to everybody.
Read more »
Posted by SEESOX at 10:19 No comments:

At a seminar on 11 May 2017, Dr Yaprak Gürsoy, Academic Visitor at SEESOX and Associate Professor at Bilgi University in Istanbul, presented her forthcoming book ‘Between Military Rule and Democracy: Regime Consolidation in Greece, Turkey, and Beyond’ (2017, University of Michigan Press). Chaired by Othon Anastasakis (St Antony’s College, Oxford) Laurence Whitehead (Nuffield College, Oxford) and Stathis Kalyvas (Yale University) were the discussants.

As Gürsoy explained, the book deals with the origins of democratic and authoritarian regimes in countries in which the military is a significant political actor. Treating the military as an actor in its own right, and with a distinct corporate interest, the book looks at the circumstances of military intervention in the democratic procedure through, for example, short-lived coups d’états, the support or establishment of longer term authoritarian regimes, or by accepting the authority of democratically elected civilians. Building on Robert Dahl’s concept of polyarchy (1971), and particularly the distinction between the costs of toleration and the costs of suppression, Gürsoy argues that elite actors such as military officers support democracy, authoritarianism, or short-lived coups depending to a large degree on their perception of threats with respect to their interests. The power of the elites relative to the opposition, determined partly by the coalitions they establish with each other, affects the success of military interventions and the consolidation of regimes.
Read more »
Posted by SEESOX at 10:22 No comments: