"The one who rules Istanbul, rules Turkey"

What does the 23 June Istanbul mayoral election tell us about the present state of Turkish politics?


Special event on 1 July on the Turkish Mayoral elections

What happened?
The mayoral elections in Istanbul on 23 June saw an alliance of opposition parties: the centre-left Republican People's Party (CHP), and the centre-right iYi party. They call themselves the Nation Alliance. 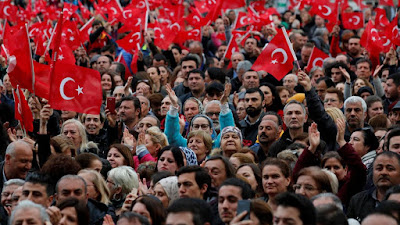 The elections were a rerun of the 31 March elections that were controversially annulled by President Erdogan’s AK Party due to alleged irregularities. This saw President Erdogan’s AK party’s candidate for Mayor lose by a decisive margin, and power in the capital moving away from AK for the first time in a quarter of a century. President Erdogan himself has said that: ‘The one who rules Istanbul, rules Turkey’, and these results mark an important turning point for Turkish politics.

These elections are only one of the six national elections and one referendum held in Turkey since 2014. This includes the local and presidential elections in 2014, the two general elections in 2015, a 2017 constitutional referendum, the 2018 presidential and parliamentary elections, and finally, the local elections of this year. These elections have seen a gradual, but definite, shift away from the ruling coalition towards the opposition. Based on the results of the recent Istanbul elections, the governing coalition no longer commands popular support in the country. However, the divisions between the large urban centres and rural areas are stark.