“Model Transitions? Rethinking the “success story” of Southern European democratization” is the
title of this year’s Santander Fellow Workshop that was held on May 18 and which was sponsored by St. Antony’s ESC and SEESOX, Oxford University, and Carlos III University - CONEX, Madrid. Historians, political scientists and political sociologists debated in a comparative and transnational manner the relation between the economic crisis that broke out in 2008 and the current political attempt to question the memory of the transitions to democracy in Portugal, Greece and Spain - one of the most dramatic turning points in 20th century southern European history. 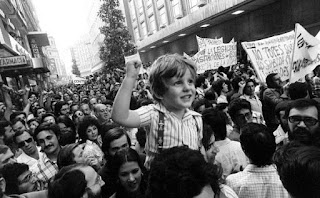 Almost from the very outset, these processes were celebrated as the Southern European vanguard of Samuel Huntington’s famous “third wave” of democracies. Until the 1990s the democratization of Southern Europe was described as a fundamental historical change, which allowed the building of a stable party-system, putting an end to the international isolation that was linked to the authoritarian regimes, and initiating a modernization process, which enabled the three countries to reduce the economic gap with respect to their European neighbours. At the same time, the “transitology” sub-field that emerged in the 1970s and 1980s to explain this “third wave” identified these transitions not only as model exemplars but also as yardsticks that could potentially be exported to other contexts, especially Latin America in the mid-1980s or Eastern Europe after 1989.
This tried to examine the intricate relations between politics, memory and history in present-day Spain, Portugal and Greece in a comparative and transnational manner, posing the central question of why these so-called success stories are being challenged at present. It intended to look at the ways in which the crisis that began in 2008 and the collapse of the social welfare system that were built in the late 1970s reinforced the need to dig deeper into the past and to re-examine post-authoritarian phenomena. At the same time, whereas the imperatives of the European Economic Community in the 1980s and the EU in the 1990s were to create more distance from the memory and practice of the insular dictatorships of the 1970s, the contemporary European crisis creates, unwillingly, favourable conditions for revisiting them. Furthermore, the collapse of the bipartisan political systems and the rise of new political actors referring directly to the transitional processes, such as Podemos, further call for a novel reflection on the recent past. There is an on-going debate, moreover, all over Southern Europe, on the need to look at transitions from a bottom-up perspective, as opposed to the predominant elite approach. Moreover, there is a proliferation of critical perspectives of the transitions at present, blaming the “democratic deficits” of the present on either the “incomplete,” “limited” or “flawed” transitions and the failure to effectively come to terms with the authoritarian past that rendered the processes of change and reform incomplete. It is precisely these complexities regarding the past and present of transitions, the contingency of theory and the cognitive limits of transitology, beyond success or failure narratives, that the workshop tried to tackle. Moreover, the workshop touched on issues of memory, mourning and closure, approaching the topic of transitions also in terms of memory politics, memory wars and competing moral narratives regarding the past emerging at the same time in these three countries.

The aim of the workshop was, furthermore, to assess the political, economic or institutional evolution since the late-1970s and to renew and improve our analytical lexicon regarding the ways in which we tackle the past. The questions posed in the three sessions included the extent to which the economic crisis that triggered a political and institutional crisis affected the memory of the transition to democracy. How the European austerity programs affected the trust in the European Union that had been strengthened in the aftermath of the transitions; and to what an extent the resurging grassroots movements, which make references to the transitional past, have an electoral impact.

In the first session on memory, Filipa Raimundo focused on the ways in which the parties of the right and the left dealt with the memory of the Revolution. Alex Quiroga focused on the attacks on the model narrative that have been waged in Spain and its resilience despite bottom-up perspectives that question the top-down narrative, emanating from the cultural field (such as documentaries and feature films). Kostis Kornetis tried to trace the evolution of public memory regarding the transitions in Greece and Spain and the ways in which public history affects academic understandings of the past. In the second session on institutions and Europe, Antonio Costa Pinto focused on the impact of the crisis on political parties in Portugal and the way in which the latter try to deal with it, notwithstanding their history. Irene Karamouzi focused on the peace movement in Greece in the 1980s and the way in which the Greek state itself sponsored and co-opted grassroots activity, to the ruling party – PASOK’s – favour. Maria Elena Cavallaro traced how the idea and the institutions of Europe affected Spanish political thinking over time. In the third session Robert Fishman laid out the ways in which different historical antecedents affected the distinct evolutions of the crisis but also protest in Portugal, Spain and Greece. Pedro Ramos Pinto and Tiago Fernández highlighted the varieties of ways in which social actors mobilize in Portugal, stressing the positive but polysemic views on transitions within the “new” new social movements. Kostis Karpozilos focused on the revolutionary moment of the transitional period in Greece regarding actors who believed in the radical overthrow of the system and a dynamic socialist alternative to the way in which things evolved in the country since 1974.

Participants dealt with the top-down versus the bottom-up perspective on transitions, the presentism of social actors regarding the past, the ways in which different models of transitions (the negotiated versus the revolutionary one, for instance) produced different kinds of political learning of the current political ruling class, and the ways in which the past is being used by social movements and/or shapes the tolerance (or lack thereof) vis-à-vis said protest activity in the three societies. There was consensus, moreover, that the response of Southern Europe to the crisis involves many common elements, including civil society’s discontent, rising illiberal tendencies introduced by the political elites, booming Euro scepticism, but also an accommodating and compassionate attitude vis-à-vis the mass refugee flaws.

The workshop concluded with an interesting roundtable discussion between various scholars with an impressive track record in the transitology subfield in the past (Othon Anastasakis, Nancy Bermeo, Tom Buchanan, Lawrence Whitehead, Robert Fishman, Antonio Costa Pinto), who pointed out the successes of both the transitions themselves and the theory connected to them. The conclusion was that when trying to update our analytical lexicon regarding the transitions and their afterlives, we should attempt to strike a balance between the longue durée and the événementielle nature of events, as well between the idealizing and demonizing narratives regarding the former. Finally, we ought to differentiate between the transitions and the democratization that followed and between Transitions with a small t and with a capital T, in an attempt to forge a more balanced and more complete view vis-à-vis said processes.
Posted by SEESOX at 16:40