Ezgi Başaran, award-winning Turkish journalist and former editor of Radikal, the liberal daily closed down in March 2016, has now moved to St Antony’s College. While at Oxford she is preparing a book on what really lay behind the failure of the Kurdish peace process. On 4 May she gave us a comprehensive presentation. 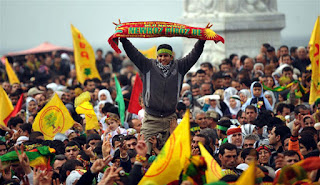 ed that the peace process became public in March 2013, when the letter from Abdullah Ocalan was read at Newroz. In it, he announced that the armed struggle was over and that a new era was beginning “where politics gain prominence over weapons”. In fact, this represented a new stage in a process that had begun in 2005, through internationally mediated talks in Oslo, becoming face to face talks in 2008, and which continued despite the Habur incident in October 2009. But talks had been halted when AKP won a landslide victory in the 2011 general election.

So why did the Turkish government decide to return to the table in 2013? Its decision reflected three factors:
The 2013 peace process included multiple actors – from HDP, Ocalan himself (in Imrali prison), the European diaspora, MIT (Turkish intelligence), AKP and PKK (in Qandil). If government was unhappy with positions taken, meetings at Imrali (on an island) were cancelled without notice – “the boat is broken”. And criticism of AKP by any individuals would lead to exclusion from the talks. The process was “alla Turca”, with no clear shared vision, no agreed agenda and no international monitoring.  Key Kurdish demands were education in mother tongue and some degree of autonomy for Kurdish regions within Turkey, but not an independent state. Turkey acted to protect its own side, giving legal authority for the government negotiators in order to protect them from prosecution. It also made limited concessions on cultural issues, though these were perceived as too little and too late. PKK released hostages and in May 2013 began to withdraw without awaiting legislative cover. But this withdrawal was suspended in September after Erdogan’s statements linked to the Gezi Park events and Turkey’s failure to change its anti-terrorism laws.

A further problem was Syria, where Turkey’s treatment of Syrian Kurds – especially at Kobane - undermined the government’s credibility with its own Kurds and led to accusations of Turkey helping ISIS. This highlighted a major divergence between Turkish government and PKK/Ocalan’s attitudes. And the government fomented differences between Ocalan (in Imrali prison) and the PKK headquarters in Qandil.

Nonetheless, agreement on a 10-point road map was reached and announced publicly, in the February 2015 “Dolmabahce accord”. Ocalan called for PKK disarmament and both sides agreed to the establishment of a monitoring committee. But an initial welcome from Erdogan was subsequently toned down, even if his government contradicted him. And by 21 March Erdogan disavowed the accord entirely, blaming the “warlords in Qandil”, and later denying the existence of a Kurdish problem in Turkey.

The process had survived a very bumpy road over the years. So why did it fall apart when peace seemed to be within reach?

While there were many contributory factors, the ultimate cause was Turkish electoral politics. The HDP had made clear that they would block Erdogan’s goal of becoming an executive President, and the absence of any deal trading Kurdish peace against Erdogan’s presidential ambitions led Erdogan to disavow the entire process. But why did the HDP use this tactic, when their electoral success was founded on their perceived ability to deliver peace?

The price of the collapse of the peace process has been urban warfare throughout the Kurdish regions – civilian and military deaths, relocations, curfews and major damage to cities. While HDP and some parts of AKP would like to restart talks, there is no willingness from the side of Erdogan, whose control of AKP is now further consolidated. On the PKK side, Ocalan remains the unchallenged leader; his is the only voice that can control the radical PKK youth movement’s desire to push for full independence.

So there seems to be little or no reason for optimism that things will improve in the short term.
Posted by SEESOX at 18:16