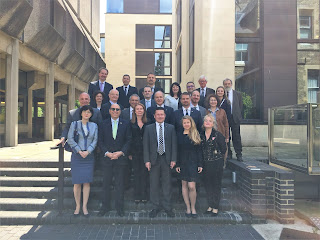 On 6 June, in St Antony’s College, Oxford, SEESOX hosted its annual lunch for the Ambassadors of the countries of South East Europe posted in London: the seventh such gathering. A number of topical issues affecting the region were discussed.

In view of the Bulgarian, Romanian and forthcoming Croatian Presidencies of the EU, there was consideration of what the obligations of the rotating Presidency meant for the newer member states of the Union, and how Embassies prepared themselves for these. This led into a discussion of the experiences of longer-term member-states including Austria and Greece.

The successful solution of the Macedonia name dispute was noted and applauded, with an assessment of how the agreement had been reached, and implications for the two countries directly concerned, the region and the EU. This led to a wider discussion of the direction and future of the Union, with a strong focus on the merits of making progress on enlargement. This should not await the prior deepening of the monetary union.


SEESOX raised the scope for possible agreements between SEESOX and the Central Banks of South East Europe, in order to further work on political economies: and invited Ambassadors to make enquiries and report responses.

SEESOX also reported that next year’s seminar series would be on the geo-politics and geo-economics of the region, and asked Ambassadors to put forward suggestions for themes and possible speakers.
The lunch started with a briefing by SEESOX on this year’s comparative seminar series on the diasporas of South East Europe, and their effect on host and home lands. A number of Ambassadors contributed their views on the extent and complexity of their diasporas, stressing the range of and diversity of the people who comprised them, and the resulting differences of make-up and experiences. It was evident that there was much scope for future productive collaboration between SEESOX and the Embassies on this issue of mutual interest.