On 12 June, for the 7th consecutive year, Global Strategy Forum invited SEESOX to give a presentation on the region. This drew its inspiration from the Hilary Term seminar series, which constituted a comparative study of the diasporas of South East Europe. 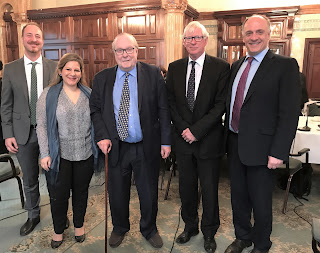 Manolis Pratsinakis described the new South East European diasporas as an outcome of ongoing extended emigration flows from the region over the past three decades. He defined the differing types of migration outflows and explained their historic evolution and their relative size per country of origin. He then linked the data about the migration flows to the demographic profile and the demographic projections of the countries in the region. He also set out the current significance of South East European diasporas, as well as the challenges and opportunities they presented for their respective countries and governments, and for host countries. He highlighted the phenomenon of brain drain; and set migration in the context of free movement within the EU. He concluded on the potential contribution of the South East European diasporas, drawing on examples from the presentations in the SEESOX Hilary Term seminar series.

Foteini Kalantzi continued the comparative focus, with examples of both similarity and dissimilarity. The case of Greece, where emigration resulted from economic crisis, was analysed to show the political participation of Greeks abroad, and specifically their right to vote. The cases of Bosnia and Cyprus illustrated the diversified political engagement of diasporic groups: their activities reflecting a certain readiness to move away from ethnic-nationalist political debates. Members of the Serbian diaspora had often been seen as leaning towards nationalist stances, but recent emigrants showed far more concern for governance issues. In the case of Turkey, internal politics and divisions were reproduced within Turkish communities abroad. The diaspora could be a progressive force seeking peace, reform and resistance to authoritarianism; or a status quo force seeking stability; or a backward force promoting ethnic divisions and nationalistic attitudes.

Othon Anastasakis discussed the historical significance of the UK as a destination for all the countries of South East Europe. Past migratory waves during the cold war period included Greeks, Cypriots and Yugoslavs. After the collapse of communism, the wars in Yugoslavia led to the emigration of many citizens from the war-torn successor states. During the post-2000 period Romanians and Bulgarians migrated to the UK in significant numbers, as a result of the eastern enlargement and the open UK policy on migration from the EU. Anastasakis discussed the social composition of South East European diasporas in the UK, their multiple, national and adopted identities; and also the tendency towards negative UK attitudes, the “otherisation”, and the stereotypes mainly presented in the popular media, particularly in the case of Romanians and Bulgarians. At present, many citizens from South East European countries were having to cope with the impact and the uncertainty of Brexit. Some of them enjoyed UK citizenship, others were going for a settled status in order to remain, and others would probably move to other European destinations as part of a “circular migration”, especially if/when Brexit happened.

David Madden reported on the one-off seminar on the dark side of the diasporas, and drew some tentative conclusions. There was a lack of options for migrants from the Western Balkans to enter and work legally in the rest of Europe; the vulnerabilities of migrants and the diaspora were ruthlessly exploited by Organised Crime Groups; regional stability and education were essential elements of an enduring solution to the problems; and, overall, criminality seemed to follow the diasporas - and use them as bases, supply lines and contacts - rather than being encouraged by them.

The ensuing discussion concentrated on the role of diasporas in host and home lands, and their contribution to both bilateral and hence international relations.

The Chair of GSF, Lord Lothian, hosted a lunch in the House of Lords. The guest speaker, Misha Glenny, highlighted the importance of South East Europe, including for the future of the EU; stressed the need for a continuing focus on enlargement; noted the traditionally important role and position of the UK in these debates; regretted the recent lessening of interest; and underlined the advantages of reengagement.