The annual SEESOX lecture was given on 24 May by President Josipovic of Croatia, at the conclusion of his official visit to the UK in the run-up to Croatia’s accession to the EU on 1 July. The subject was: Croatian foreign policy; the EU and South East Europe.

The President started by saying that the Croats had believed that war in Europe would never happen again; but unfortunately it had happened. Croatia’s policy had been: international recognition of the country, to stop the war and help the peace; the territorial integrity of Croatia; and the plan to join NATO (achieved 2009) and the EU (2013).

One purpose of the EU was to bring peace to the continent, and Croatia had taken this route. Another was economic development, and Croatia was building a new economy. A third was better relations with neighbours, and Croatia was also active here: rebuilding connections, overcoming problems, and discussing all open issues. Of course there was still much to do: eg working on the continuing problems of missing persons, and border issues.

The EU vision meant peace, security, freedom (and the balance between the two), solidarity and justice. The path to accession entailed strict criteria, but had helped Croatia become a better society than it had been 10/15 years previously: improved rights for minorities, improved rule of law, better investment climate, a crack-down on corruption. Was this connected with foreign policy? Yes. Cooperation, an improved position in global markets, rule of law, real partnerships: all this added to Croatia’s European future. Europe was not complete without South East Europe: Croatia was not a “leader”, but could use its experience to help the other countries of the region vis-à-vis the EU; and would also play its part in the current EU debate over more/less centralisation etc.

On 20 May, Ambassador Konstantinos Bikas spoke at a SEESOX seminar on Greek foreign policy. The major task was to strengthen the external credibility of Greece. The financial crisis in South East Europe was part of the global debt crisis. There were many factors: debtor country misuse of loans; EU governance failures; unsustainable interest rates; no fiscal transfers within Euro zone. Greece had now come close to a primary budget surplus, with huge social pain; but Greeks wanted to stay within Eurozone.

The Greek relationship with the Drachma was not the same as UK with the £. Greece needed a relationship with rest of Europe (and inflationary memories of Drachma made Grexit deeply unattractive). Regional foreign policy: there was regional consensus on abandoning nationalism in the Balkans. There were good prospects on Greece/Turkey. Turkey would eventually join the EU, and that was in the interests of Greece. Cyprus: there had to be a solution. This would need to go beyond talks between the two communities to involve Ankara directly. Energy discoveries created a new situation and all parties in E Med must benefit. Benefits should be shared for the entire island, after a resolution of the current division. There should be regional partnerships.

Developments on Serbia/Kosovo were positive. Greece accepted Kosovan membership of EBRD. Greece was keen to find a solution on the name of FYROM, but was the government in Skopje ready for compromise? Relations were pragmatic, but the ball was in the Skopje court for a solution.

The cultural heritage of Greece in the UK was remarkable, as was the number of Greek students: third after China and India.

The Ambassador added a number of points in answer to questions. Greece had not collapsed: it still held 35th place in UN prosperity scale. It would become more competitive after the crisis. Greece was ready to accept mosques as the obligation of a democratic society: this was in no way a natter of Greek/Turkish relations. Illegal immigration from Turkey was a huge quantitative problem, bringing social problems in its wake; the EU had failed to press Turkey, and should do more. The rise of Golden Dawn was connected more to this than to the economic crisis.

After 5 years of austerity, 75% of Greeks still wanted to be in Euro – it was seen as an anchor. People were angry and in pain, but they stuck to the policy.

There was no way to impose a solution on Cyprus, especially in the current crisis. Cyprus was not a failed state. Attempts to use the crisis to push Cyprus to a solution wouldn't work and created nationalism.

Cyprus and the energy developments in the Eastern Mediterranean 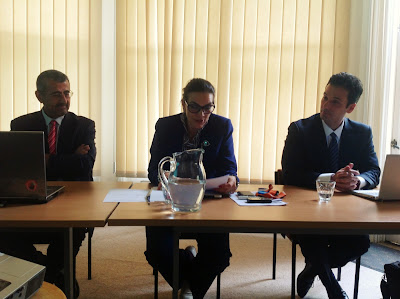 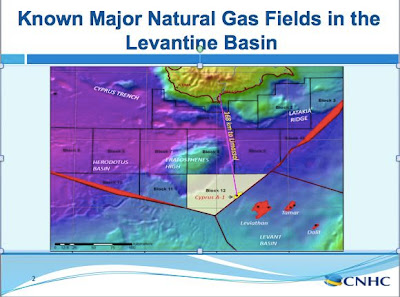 These two consortia have committed to very aggressive survey and exploration programs that over the next 2-3 years will cost of the order of US$2 billion dollars. This substantial investment confirms their confidence for success.
All indications are that Block 9 holds substantially more gas resources than Block 12. Based on the above it is estimated that all 6 leased Blocks potentially hold 40 tcf of natural gas. This in turn is a good indication that indeed the Levantine Basin has 122 tcf and the Cyprus EEZ 60 tcf of gas, as suggested by USGS (USA Geological Survey)
2. Cooperation prospects with Turkey, Israel and Lebanon
Israel has a  proven and  probable gas reserves (Tamar) – 10 tcf,  proven gas resources (Leviathan) – 19 tcf as well as small gas fields and prospective gas resources (undrilled prospects) – 15 tcf. There has been a lot of very high level contacts between the two countries recently including a visit by President Anastasiadis to Israel earlier on in the month and prospects for closer cooperation are very good.
Lebanon is in the process of going for its first licensing round, and it estimated to have at least 25 tcf and there is a lot of interest already from perspective bidders. Lebanon has also shown interest for cooperation with Cyprus.
To pipeline or not to pipeline – that is the question?
The geography of the area and the legal implications therefore mean that even if Israel wanted to build a pipeline to Turkey – it will need the consent of the transit states – i.e. Syria, Lebanon or Cyprus. In the current political context this consent will be very difficult to achieve.
Additional legal limitations arise wrt transit via pipelines through EEZ under Energy Charter Treaty (Cyprus, Greece and Turkey are parties to it).
According to Ellinas, the answer to pipeline or not to pipeline can only be not to pipeline and to build an LNG Plant at Vasiliko is the only logical but also economical solution for Cyprus.
The decision by Cyprus’ Ministerial Council in 2012 to establish an LNG Plant at Vasiliko, reconfirmed by the President in April 2013, was vital as it makes it possible to access world markets not just in Europe but also the Far East, thus contributing to the security of sales and stability of prices in the longer term.
With the timely establishment of the LNG Plant, Israel and Lebanon should also be able to bring their gas to Cyprus for liquefaction, making it possible to create a world class LNG hub at Vasiliko (and potentially other gas or energy dependent industries).
This is one of the main reasons KOGAS, the largest LNG trader in the world, ENI and TOTAL decided to invest in Cyprus. Pipelines do not offer flexibility in the selection of markets, there could be legal complexities and are subject to longer-term commercial and political risks.
EU Gas needs

3. For Cyprus the key milestones are:
From his side Anastasios Giamourides made the following points:

Aphrodite and other recent discoveries in the East Mediterranean have given rise to a lot of optimism that Cyprus can emerge as a natural gas exporter in the coming years. This is feasible but not a given. It presupposes significant current technical/commercial uncertainties (perfectly normal at this stage) are clarified favourably before a Final Investment Decision (FID) can be reached before early 2016. These include clarification of the exact size of recoverable reserves; and the ability of Noble Energy and any partners to contain infrastructure development costs (production, pipelines, liquefaction etc.) and sign long-term sales contracts that capture high prices and other commercially appealing terms.
If economics at Aphrodite alone do not work, then Cyprus will have to seek economies of scale with its other offshore blocks and/or with Israel, albeit this is likely to delay the commercialisation process. Furthermore, proving up commerciality in the offshore blocks that were recently licensed to Total and the ENI-KOGAS consortium under the country’s second licensing round will at any rate be necessary, if Cyprus is to export more than the 5 mmtpa currently envisaged by Noble Energy for block 12.
Importantly, any attempt to mix (real) political problems or goals relating to the Cyprus dispute with what ought to be commercial decisions aimed at monetising these resources as efficiently as possible, could end up undermining progress, which may be fully achievable on technical/commercial terms. For example, Turkish attempts to condition development of Cypriot hydrocarbons on a solution to the long-standing Cyprus dispute can result in considerable delays, whilst these political negotiations last. Meanwhile, calls for Cypriot exports via a subsea gas pipeline to Turkey are based on the (erroneous) premise that this is necessarily a commercially superior monetisation option compared to liquefaction. Preferred options need to be defined by scoping/costing of development options and market feasibility including discussions with potential customers, led by Noble Energy and other licensees/investors.
The EU has three main reasons to take an active interest in Cyprus and help it make the most of its upstream potential as soon as feasible, and without unnecessary delays imposed by extraneous factors. First, as a means of stimulating growth and facilitating successful transition of the Cypriot economy; second, as a direct corollary of the involvement of France’s Total and Italy’s ENI in Cyprus upstream; and third, as a result of the EU’s commitment to supporting competition on the gas supply level. Support from Brussels and European capitals should thus be aimed at allowing relevant commercial decisions to be taken on the appropriate commercial (i.e. not political) levels, including licensing, exploration planning, exploration and production operations, commercialisation, and export markets. Failure to meet these objectives could impact negatively on the economic sustainability of Cyprus; market effectiveness and profitability potential of major European energy companies Total and ENI; and the EU’s own stated goals of security of supply and competitive energy markets.
From my side having convened both of the South East Mediterranean hydrocarbon seminars of this term – the first one by Deputy Energy Minister of Turkey Murat Mercan and this one by Dr Charles Ellinas, I can only conclude that both countries would stand to benefit if there was direct dialogue between them. The encouraging thing is that both speakers indicated that there was a willingness at least to exchange ideas and to explore possible cooperation.
[1] See blog on the 22nd of April event http://akaminara.wordpress.com/2013/05/06/turkey-and-the-eu-energy-policy-seminar-at-st-antonys/
[2] http://www.oxfordenergy.org/wpcms/wp-content/uploads/2012/07/NG_65.pdf
[3]UNCLOS UN Convention of the Law of the Seas
Posted by SEESOX at 01:51 1 comment: