An end to ‘Merkelism’? German decision-making in the Greek crisis as ‘Stigma Management’

At a SEESOX lunchtime seminar chaired by Kalypso Nikolaïdis on 24 May 2016, Lea Börgerding, a second-year MPhil International Relations candidate at the Department of Politics and International Relations at Oxford, presented part of her recently submitted and particularly thought-provoking MPhil thesis. Under the title ‘An end to “Merkelism”? German decision-making in the Greek crisis as stigma management’ she outlined a somewhat different reading on the events occurring between January 2015, i.e. the coming to power of Alexis Tsipras’ SYRIZA government, and August 2015, the finalisation of the third economic adjustment programme. It was indeed Tsipras who had coined the term ‘Merkelism’ in his election campaign to denote the severe austerity measures on which the creditors insisted; and even though he did not repeat the term after becoming Prime Minister, an end to austerity and a restructuring of debt were the primary goals of his government––putting him directly at odds with the German position. 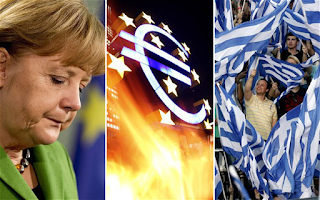 In the literature, as Börgerding outlined, the German position in the negotiations with Greece is usually explained by one of two paradigms. Applying mostly to the beginning of the crisis, hegemonic stability theories see Germany as a benevolent hegemon that provides public goods in the form of financial assistance. Domestic economic interest theories, on the other hand, question this approach by pointing to more interest-driven explanations relating to Germany’s exposure to the Greek debt and the severe consequences it had on its economic and trade sector competitiveness. These theories focus on systemic explanations and lead to an interesting puzzle when looking at the third financial assistance programme. By that time, German exposure to the debt had declined and the risks posed by Greece leaving the Eurozone were assessed as far less dramatic than before. Moreover, this third package had become rather costly and public support for it had been steadily declining in Germany. So, why did the German government nevertheless agree to it? In order to understand German decision-making at the time, Börgerding focused on an actor-centred approach, utilising stigma management theory. Stigmas are defined as severe ‘social disapprovals’ of a particular self-image or constitute behaviours that are seen as transgressing a prevailing normative standard of international behaviour or interaction. The key assumption of stigma management theory in international relations, as outlined most explicitly in the works of Rebecca Adler-Nissen, is that states generally care about the perceptions that other states hold of them––their image, in other words––and act strategically to ‘safe face’ should negative perceptions prevail. This is particularly bound to happen in times of high uncertainty about the outcomes of policy choices (like the Eurozone crisis) and in what has been called ‘closed cultural communities’ such as the decision-making bodies of the Eurogroup. Once a state recognises the imposition of a severe stigma, it seeks to rectify its image; at that point, strategies of ‘moral coercion’ may prevail over purely economic rationales.

This is what happened to Germany between January and July 2015. While not claiming that the new SYRIZA government had used this tactic deliberately, Börgerding explained that after the elections a decisively anti-German discourse entered the dialogue on the official state level, especially within the discussions of the EU finance ministers. Germany became a metonym for the Eurozone’s policy of austerity, while the Greeks also sought to create an alliance of the south sympathetic to their position. Lacking any real bargaining power, the Greek side pushed a moral argument focusing on historical memories as well as on discussions of hypocrisy connected to it.

The German side perceived this kind of negotiations as ‘moral coercion’ and initially became far less inclined to accommodate Greek demands. Instead, German decision-makers sought to create a counter-stigma by discrediting the Greek government’s position both internally as well as in EU-level negotiations. Rather than focusing on the content, they deliberately emphasised the Greek style of bargaining and socially deviant behaviours by Greek representatives in Eurogroup meetings (inter alia an inappropriate dress-code, which was interpreted as a lack of respect). The German side also explicitly sided with the ‘hardliners’ in the Eurozone in order to justify its position.

This strategy, however, did not really work and latest by July 2015, the German decision-makers felt increasingly threatened by the normative stigma that had labelled their negotiating strategy as ‘unprecedentedly harsh’, ‘punitive’, and even ‘nationalistic’. As a result, they engaged in a strategy of soft ‘stigma recognition’ that considerably affected Germany’s policy choices in ways that out-weighted narrow domestic interests and pure financial stability considerations. Of particular importance in this respect was the Greek referendum on 5 July; arguing against letting the people decide was easily perceivable as arguing against the people––and against democracy. Letting Greece exit the Euro under these circumstances would have considerably harmed Germany’s image in Europe and the world, which is why some decision-makers perceived the famous Schäuble paper even as ‘dangerous’ for Germany. In the end, Germany supported the third financial aid package, seeing it as a generous concession to the Greek side. The latter, of course, mostly saw the harsh conditions attached to it and arguably had some problems grasping the generosity.

Börgerding’s argument, which is substantiated by numerous interviews with German decision-makers as well as an analysis of all available data concerning the negotiations, thus emphasises that in international relations image-related concerns may prevail over purely political and economic cost-benefit considerations. Conversely, this means that even ‘weak’ negotiating partners have morally or socially based leverage that they can employ. Again, while not claiming that the Greek side employed this strategy deliberately, it was this kind of influence that contributed towards changing the German position. As Börgerding’s talk clearly showed, when analysing international negotiations, international relations scholars should therefore include these kind of explanatory patterns in their models––not as a replacement for other explanations, but as an important addition to them.