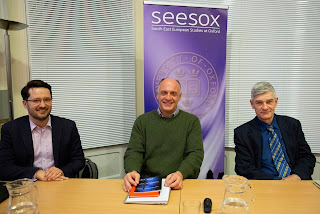 Russian influence on South East Europe is very divisive; some countries offer ample potential for Russian access while the others worry about external interference. On the 4th of March, SEESOX held a seminar examining Russia’s geopolitical objectives in South East Europe. The speakers were Professor Roy Allison (St Antony’s College, Oxford) and Andreja Bogdanovski (University of Buckingham). The seminar was chaired and introduced by Dr Othon Anastasakis (Director of SEESOX).

Dr Anastasakis began the seminar by challenging seven clichés regarding Russia-South East Europe relations.
Professor Allison began by explaining a broader change in Russian strategic thinking after she occupied Crimea in 2014 and increased her influence in the Black Sea. In addition to that, the Russian presence in the East Mediterranean is no longer negligible and constitutes a permanent presence to support operations in Syria. These brought more points of friction with NATO states. Professor Allison agreed with Dr Anastasakis’ views on Russian influence in the Western Balkans. According to him, Russian intervention is viewed very differently today, with Anti-Russian movements, Orthodox Macedonians and Bosnian Muslim population creating a mixed picture which no longer offers a natural relationship as before. Professor Allison continued by reviewing the strategic intentions, objectives and aspirations of Russian intervention to Western Balkans in five points;
In the light of these objectives, Professor Allison considered that Russia seeks political, social, religious, economic, energy, intelligence ties rather than a broad relationship or a military intervention in the Balkans. On the other hand, Russian geopolitical success is questionable. The South Stream gas pipeline project collapsed after the Ukraine crisis. Russia hopes that TurkStream-2 can become an alternative, but, the capacity of TurkStream-2, 15.75 bcm, is just one quarter of South Stream and Russia’s ability to compete with the Azerbaijani gas through Southern Gas Corridor is questionable. Moreover, the European Gas Directive is another challenge for the pipeline. According to Professor Allison, only limited instruments are left for Russia in the Balkans, such as encouraging nationalist activities, financial relations with politicians, corruption, non-transparent money flows, disinformation campaigns, cultivating conservative Orthodox, and ethnic divisions. On the other hand, financial flow is at a certain level and integration of the EU does not seem to be diminishing. In conclusion, Professor Allison believes that Western Balkans is not a region of primary strategic interest for Russia. Russia has some capacities and sustains its limited intervention for various reasons, such as reducing the ability of western states’ influence on Ukraine and the wider region.