A controversy revisited: Arnold Toynbee, the Koraes Chair, and the Western Question in Greece and Turkey

On 10 February Richard Clogg gave a special lecture on the subject “A controversy revisited: Arnold Toynbee, the Koraes Chair, and the Western Question in Greece and Turkey”. 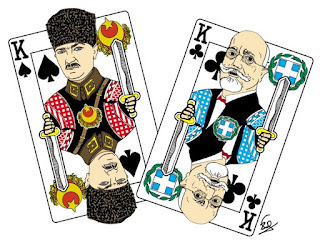 Othon Anastasakis chaired, warmly welcomed Richard to St Antony’s, of which he is an Emeritus Fellow, and referred to his authoritative “A Concise History of Greece”, and his expert works on Toynbee, including “Politics and the Academy”.

Richard briefly rehearsed the story of the rise of Arnold Toynbee from brilliant young academic to global historical guru (though largely forgotten now). On his death in the 70s Der Spiegel had acclaimed him as the most renowned historian of our time. A curious episode in his career was his five year tenure as the first holder of the Koraes Chair at King’s College, London. Appointed in 1919, he resigned the Chair in the mid 20s under heavy pressure from the rich Anglo Greeks who had funded it, and from members of the academic community in London (prominent among them R W Seton Watson). The reason was critical reports Toynbee had written about the treatment of Turkish nationals by the then Greek administration in Asia Minor in 1921.

Richard then turned to his own role. He had written the story of this episode using Toynbee’s own papers. He had included an intriguing suggestion by Toynbee himself that the first holder of the Chair should be “more of an active Philhellene”. It was only subsequently that Richard realised the implications of this comment when he had access to the full story in the form of letters from Toynbee to his mother in 1911-12 which revealed him as anything but a Philhellene: indeed a Mishellene. He considered the Greeks indolent, hangers on, café loafers. This was the kind of “casual racism” which was widespread at the time: even Beatrice Webb was not immune. It was clear that Toynbee was unwise to have applied for the Chair. He concluded with two thoughts: it was easier to write history about times when everything was committed to paper, rather than now; and that some academic institutions were unduly protective of their archives, though this had changed for the better.

As Discussant, Michael Llewellyn-Smith said that through diligent research Richard had made this fascinating story his own. He added that Toynbee was not alone among ardent classicists at the time and earlier in being disillusioned by modern Greeks. Toynbee had experience as a propagandist, and had also worked for the Foreign Office eg as an expert on Greece’s post-war claims at the Paris Peace Conference. He saw both Greece and Turkey as victims of the West, and as both equally incapable of ruling over mixed populations. Venizelos saw the landing at Smyrna as a civilising mission, but this crumbled in the face of the growth of Turkish nationalism.

The Q&A session centred on the clash of civilisations, the continuance of stereotypes, and the (unique?) oddities of Philhellenism/Mishellenism.
Posted by SEESOX at 12:37