The Greek Left from the Balkan wars to the Eurozone crisis: A national/international history

On 2 February 2016, as part the European Studies Centre Visiting Academics Seminar Series in cooperation with SEESOX, this year’s A.G. Leventis Fellow at SEESOX, Kostis Karpozilos, presented his on-going work on the history of the Greek Left. Barnaby Raine from Wadham College, Oxford, chaired the event. 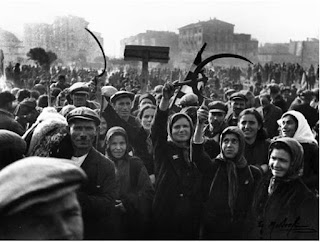 In line with the character of the lunchtime seminar series, Karpozilos gave an overview of a project, which is still very much a ‘work in progress’, thus welcoming critical ideas and thoughts from the audience. Basically, the project seeks to offer a concise and synthetic history of the Greek Left from the Balkan Wars to today. The first socialists entered the Greek parliament in 1915, exactly 100 years before the SYRIZA government of Alexis Tsipras rose to power last year. It was the first time in the post-1989 European history that a party from the left actually had the opportunity and the means to implement a radically different vision of the future – however, a vision that was substantially curtailed by the circumstances in which Greece found itself, especially its dire financial situation. So far, the Greek leftist experiment has failed, with the government bowing to international pressure and accepting further austerity measures; but it remains to be seen what the future holds for the Greek Left.
With SYRIZA’s rise to power, the public and academic interest in the history of the Greek Left rose. Yet despite its consistent presence in the country’s politics, a concise historical account of the Greek Left is still missing. The goal of Karpozilos’ project, therefore, is to provide an overview of its historical trajectory and thus close the existing gap in historiography. In order to do so, he uses two different, yet complementary approaches:

First, he wants to demonstrate the influence the Greek Left had in shaping the ideology and strategy of the international left. Traditionally, historical accounts of the left’s evolution in a particular country operate within the framework of a periphery-centre antagonism: the ideology of a movement or party is explained by contrasting it to the mainstream ideology of the left, which is usually found in a prominent and important centre (as in the case of the Communist International). However, such an approach tends to miss important interdependencies between the ‘centre’ and the ‘periphery’, which is why Karpozilos’ advocates a different strategy: first understanding the global geographies of the international left and then discussing the interactions and influences between the different currents. In this sense, the question becomes what contributions the Greek Left provided to the ideological and strategic successes and failures of the international leftist project, rather than how it differed from it.

Secondly, Karpozilos’ wants to offer a history of the Greek left that does not limit itself to the national perspective but includes contributions by Greek leftist ideologues and activists throughout the world. He seeks to emphasise the intrinsically internationalist and diasporic character of the Greek left by, for example, pointing not only to the significant contributions of the Greek expat communities in Paris that had a significant influence in reformulating the Western version of Marxism, but also by looking at the 100.000 Greek political refugees with an agrarian background that fled to the Eastern Block after the civil war and created communities within a socialist system. Their presence is instrumental in understanding the contemporary left in Greece, especially since many of them returned to Greece after 1974 and remained communists, thus regenerating the idea of social repatriation of socialism in Greece. In contemporary historiography, such ‘external’ involvement is often seen as a mere reflection of the national Greek leftist ideology, but these networks brought expertise and knowledge from outside to the Greek domestic arena. According to Karpozilos, the contemporary Greek left thus formed as a conglomerate of different left histories, meaning that one has to analyse all these different influences in order to understand its historical and ideological trajectory. Limiting oneself to developments in Greece does the project no justice.

As became clear during the Question and Answer part of the seminar, the questions raised by Karpozilos’ are undoubtedly important, not only from a Greek perspective, but also for our understanding of the historical developments within the international leftist movement. Furthermore, this ambitious project has practical implications as it may potentially explain the rise in radical leftist activism that we see in other Balkan countries, and maybe even around the world.
Posted by SEESOX at 12:24