Alternative religious responses to the ethnic crisis in Bosnia and Herzegovina: Faith-based peace and reconciliation

In week 3, as part of SEESOX’s Hilary Term Seminar Series dedicated to ‘South East European Realities amid Europe’s multiple crises’, Julianne Funk, a peace researcher and practitioner lecturing at the University of Zurich gave a talk on ‘Alternative religious responses to the ethnic crisis in Bosnia and Herzegovina: Faith-based peace and reconciliation’. The seminar session, which took place on 3 February 2016, was chaired by Alice Bloch (St Edmund Hall, Oxford), while Adis Merdzanovic (St Antony’s College, Oxford) acted as discussant. 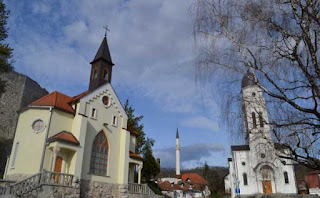 The main topic of the evening was the relationship between religion, peacebuilding, and stability, which is of particular importance for understanding the current developments in Bosnia and Herzegovina (BiH). In fact, the country currently finds itself in a social, economic, and political crisis that potentially puts the entire post-war peacebuilding project at risk. Just recently, the former president of the European Council, Herman van Rompuy, deemed BiH the most problematic case in the entire Western Balkan region. While BiH’s inadequate state structure and a lack of engagement by the international community may be cited as reasons for the crisis, within the general framework of post-war peacebuilding the relationship between religion and peacebuilding certainly deserves our attention as well. In fact, this issue goes well beyond the particular case of BiH, as we may ask the general question of what to do with religions in a post-war context where religious affiliation was one of the main distinguishing features among the warring parties. Should we exclude religion from the political arena altogether or should we try to integrate it within our post-war reconciliation and peacebuilding efforts?
In her talk, Julianne Funk sought to show that faith-based peacebuilding and reconciliation is theoretically conceivable as well as practised in post-war Bosnia. Basing her analysis on a case study of four distinguished Bosnian Muslims, she argued that these individuals have come to see peacebuilding not only as a vocation in a religious sense, but also as a means to spread the message of peace to their religious community and thus promote reconciliation. The process, however, was by no means straightforward. In fact, peacebuilding in post-war Bosnia started with traditional, secular efforts and projects, while the notion of ‘faith-based peacebuilding’ appeared to many on the ground as an oxymoron. Religion was seen as something that divides Bosnians, not something that may potentially unite them. However, roughly five years into the post-war period (around the year 2000) and not least due to the establishment of BiH’s Interreligious Council in 1997 and pressure from international funders, faith-based peacebuilding took root; some Muslim peace-builders contributed to dialogue and reconciliation through individual civil society initiatives or as imams in their own mosques. Others took first steps and joined secular civil initiatives while some secular civic organisations accepted the hands of believers to work together.

As Funk outlined with respect to her four individuals, there is no absolute antagonism between religion on the one hand and peacebuilding and reconciliation on the other –– even if religious peace-builders remain rather unique cases in the Bosnian context. While vocation is key to the identity of her four case studies, combining their faith explicitly with their peacebuilding activities is what truly distinguishes these individuals. In her presentation, Funk outlined a set of peacebuilding and reconciliation methods that her religious peace-builders adapted to their contexts. By combining secular methodology with the component of belief, they came up with a set of concrete techniques that allowed them to address reconciliation in a more promising manner.

In his discussion, Adis Merdzanovic concentrated on the larger picture by raising questions related to the generalizability of the Bosnian results. While nobody doubts that religion may lead people to do good things, like engaging in peacebuilding, one has to admit that it may lead them to do many harmful ones as well, he argued. Rather than trying to explain peacebuilding as religious vocation, he therefore suggested to see it as a tool to reach the religious parts of the society and to engage them in the larger peacebuilding effort. One challenge in this respect is of course the overarching religious organisations that usually act in a political manner and may impede peacebuilding projects by individual believers. For faith-based peacebuilding to be effective, it has to include the religious leadership as well as the efforts from the individuals on the micro-level.

The two rather different contributions sparked a lively debate in the Question and Answer session of the seminar, which targeted not only the general argument but also the place of religion in contemporary Bosnia and Herzegovina. As the discussion showed, much more research is needed in order to understand the difficult relationship between religions and peace on the one hand, and religious diversity and the potential for crisis on the other.

The podcast of the session can be found here.