Geopolitics of Fear: South East Europe in a dangerous neighbourhood

This was the first, scene-setting, seminar in SEESOX’s Hilary Term series: looking at South East Europe as a region in the middle of a triangle of instability: Ukraine, the Middle East, North Africa. 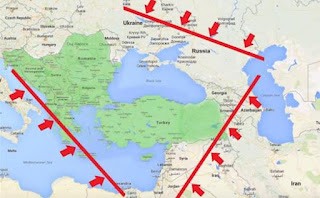 Othon Anastasakis asked whether we are seeing the return of geopolitics. He pointed to the multiple crises that are affecting Europe at the moment, including the Eurozone crisis, the refugee crisis and the external crises in the neighbourhood. In the face of numerous geopolitical challenges in the neighbourhood, the EU is lacking a sense of orientation, and South East Europe as the frontline region is vulnerable. Russia in the region does not have a strategic orientation but a more tactical ad hoc approach. For their part, some Western Balkan states and Greece are often playing the Russian card vis a vis the EU, not always successfully. Anastasakis addressed the negative impact of the geopolitical environment on the domestic politics of the countries and pointed to the fact that the region is also surrounded by a triangle of illiberalism and semi-authoritarianism to the east and the south. Finally, there were two rays of “geopolitical” hope: the fact that, the region, including Turkey, is more dependent on the EU in the face of the rising threats; and the intercommunal dialogue in Cyprus.
Kalypso Nicolaidis said that geopolitics and geo-economics had become more important for the region and the world. Fear of existential threats had grown and become more amorphous. Both Greece and Turkey threatened to become black holes, and had been tempted to use this threat to their advantage: but then had shown signs of returning to a more familiar relationship with core Europe. They resembled the limes of the Roman Empire: gateways and bulwarks.

Neil MacFarlane was doubtful about talk of hope. He commented that Geopolitics had never departed from the former Soviet region of the Caucasus. Fear (rational or irrational) had long been present in international relations. One state’s neighbourhood was another state’s backyard. The Caucasus was the definition of a difficult and dangerous neighbourhood: three small states with problematic bilateral relations (Armenia, Azerbaijan and Georgia), surrounded by three big ones with divergent interests (Russia, Iran and Turkey).

Richard Caplan also questioned whether Fear and Hope captured the essence of the situation. He saw the Geopolitics of indifference, especially by the bigger Western powers: US, Germany, UK, France. This was partly because of other threats and challenges: Syria, refugees, Russia. There was also a natural pattern of alternation between engagement and disengagement. The West had dropped the ball in both BiH and Kosovo. He agreed that Cyprus was more promising.
Posted by SEESOX at 11:25