Democracy by Decree: Prospects and Limits of Imposed Consociational Democracy in Bosnia and Herzegovina 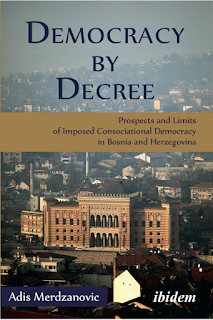 The book details the development of Bosnia’s post-war political system, which is based on a specific form of power sharing called ‘consociational democracy’. The latter includes four particular elements, namely (1) a grand coalition government, where all groups are represented in government and parliament; (2) proportional representation in government, parliament, and administration; (3) veto powers, so that each group may prevent legislation directed against its vital interest; and (4) group autonomy, meaning that the central state only decides the most important issues, whereas all other topics are decided autonomously by the groups. Normative consociationalism now claims that a stable democratic rule in divided societies will be the result of the institutional interaction between these four elements.

This is where the case of post-war Bosnia and Herzegovina becomes illustrative. The Dayton Peace Agreement, which ended the 1992-1995 war between Bosniaks, Serbs, and Croats, installed a consociational political system in the post-war state. Bosnia fulfils all the above-mentioned criteria and, in fact, in some areas prescribes parity rather than proportionality between the groups. However, looking at the political challenges Bosnia is facing today –– a bloated and inefficient state administration; large patronage networks working in the interest of group-based political parties; heated and extremely group-centred election campaigns and political rhetoric; lack of reforms; economic and social problems that led to the most recent protests –– one can hardly speak of a functioning and stable democracy. But instead of interpreting this situation as a failure of consociationalism, Merdzanovic argued that the nature of the Bosnian consociation has changed due to the involvement of external actors. Bosnia, according to him, is in fact not a pure consociation, but an imposed one. The major characteristic of an imposed consociation is an external actor that may intervene into the domestic political system by imposing laws. Since December 1997, the Office of the High Representative (OHR) in Bosnia has the authority to impose laws and remove from office publically elected officials if they violate the peace agreement. This intervention prerogative changed the incentive structure for the domestic politicians. Instead of having to find compromises on their own, which according to consociational theory would lead to a general shift towards more accommodative positions, the domestic elites could strategically capitalise on the OHR presence and wait for the institution to resolve the problems for them. The result was a centrifugal rather than centripetal tendency in the political system. In his presentation, Adis Merdzanovic explained the intervention strategies of all the former High Representatives and how they incrementally changed the dynamics of the political system and the incentive structures for the domestic elites. These shifts were the result of unintended consequences of certain decisions made by the different holders of the office, all of whom, as the speaker emphasised, had the country’s best interest in mind.

The contemporary situation of Bosnia and Herzegovina is thus the combined result of the political system’s structure, the agency of domestic political elites, and the interventions performed by the external body, the OHR. Yet this only presents the explanation of how we got to the situation in which we find ourselves in today; it does not address the issue of how the current challenges can be resolved. Apart from several questions regarding the ‘imposed consociational’ model and specific aspects of certain OHR decisions, this was naturally the main topic of the Question and Answer session following the talk. Here, Merdzanovic pointed to the recently published open letter –– written by SEESOX associates and signed by many academics and political analysts –– urging the EU and the US to reaffirm their commitment to Bosnia’s European path by, firstly, stepping up diplomatic and financial pressures against the domestic politicians that obstruct the reform agenda and its implementation; secondly, by insisting on the full implementation of rule of law and a depoliticization of the judicial and the public employment sector; and thirdly, by reaching out to the public and include the citizens in the decision-making process. Only a combination of citizen pressure from below and international engagement from above has the potential to yield positive results for Bosnia and Herzegovina, its European integration, and all of its citizens.