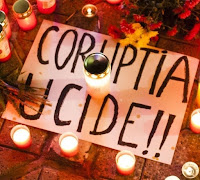 On 3 December 2015, SEESOX organised a joint event with the ESC to look at how and why institutions of governance in Romania, often established during the pre-EU accession process, had been more or less successful in consolidating their independence and transparency, within a generally poor Rule of Law (RoL) environment. Recent tragic events in Bucharest were a case study of good rules poorly implemented; would the new government, formed as a response to these events, be able to improve the RoL?

Sorin Moisa began by noting that, in the area of RoL, there had been no real “European paradigm” or acquis to underpin the newly-created institutions; indeed, the paradigm on judicial reform had evolved radically during the accession process, mainly due to the appointment in 2004 of Monica Macovei as Justice Minster. There was high social demand for judicial reform and she had managed to deliver real change through the creation and empowerment of the DNA (Anti-Corruption Prosecutor’s Office). The desire of Romanian political elites to hinder it was prevented by the EU “ratchet effect”, which caused immediate political costs for any attempt to backslide. But no comparable factors existed in the public administration reform/governance area. There was little social demand for public administration reform; the Commission had given insufficient priority to the issue; and there was no real domestic entrepreneur to carry the process forward. This represented one of the more serious failures of Romania’s post-communist political elites.

Bogdan Chiritoiu discussed the differences between the Romanian Competition Council and other parts of the Romanian public administration, and how these had led to a relatively higher administrative performance. He noted several factors, including: its arm’s length relationship with central government; the fixed terms of its board members; its relative lack of attractiveness for rent-seeking politicians; its technical complexity; its strong connections to international institutions – Commission and OECD; and its interaction with multiple industries. He noted that the situation was very different for some industry regulatory bodies, where there was evidence of regulatory capture by a limited number of oligarchic companies. He also recalled that competition policy was one of the oldest and best-established EU policies, so that the Commission had been in a position to shape institutions in the weaker member states.

Laura Stefan recalled the background to Romania’s anti-corruption efforts in the early 2000s. Initially the creation of the DNA had been seen as a form of window-dressing by Romanian political elites, who sought to be appearing to do something, but without affecting their direct interests. It had however taken a Spanish model where police worked directly under the prosecutors and where economic specialists were used. The independence of the individual DNA prosecutors (even if the Head of the DNA was appointed by the Minister) led to a situation where politicians began to question the institution – “when did we ever decide they were going to do this for real?” And, despite achieving the sacking of Monica Macovei in 2007, they didn’t maange to rein in the prosecutors. This reflected external pressure too, through the EU’s Cooperation and Verification Mechanism, active US and EU Member State Ambassadors and some EU officials.

Despite this success, there were problems. She criticised the shortcomings of the very black and white situation in Romania; there was over-reliance on the criminal justice system, with no effective administrative sanctions. As a result, there was a failure to differentiate between incompetence – a real problem – and corruption. The National Integrity Agency had been an attempt to avoid criminalisation in addressing these issues. Another flaw was the lack of information provided to the DNA by regulatory agencies and the police; this vacuum led to individual denunciations and a role for the intelligence services, with associated risks.

Emanuel Coman looked at the impact of Romania’s 2008 electoral reform. The aim of the reform had been to achieve both proportionality and accountability, but had it actually achieved that? While there was some evidence of greater renewal of the political class, at least in the Senate, money had generally played a much greater role in the electoral process, leading to the arrival of pop culture figures and candidates with money but no experience. Allied to this, real links with constituents – the aim of the changes – were still weak and those that existed tended to promote clientelism. While overall results were reasonably proportional, the vagaries of the system also meant that some MPs were elected despite not having finished first, leading to some diminution of their legitimacy. Overall, the reforms had failed to deliver their hoped-for results and there were some perverse consequences of greater accountability as well as of the national proportionality of results.

In the subsequent discussion, issues discussed included:
In summing up, Kalypso Nicolaidis looked at these issues from an academic point of view. In terms of lessons learned, thinking was needed across the EU on how far structural tendencies in weaker member states threatened Rule of Law (RoL). This was a key issue, since without RoL the EU couldn’t function. This had been a basic assumption of the EU when it was created but was now becoming a major issue. The picture painted at this workshop was of a weak state – Romania – making drastic changes; perhaps there were some lessons for Greece? These efforts had had variable results in different fields – judicial and civil; in all instances leadership was crucial – how could the right people be encouraged to come forward? Avoidance of political capture was dependent not only on technical mechanisms but also the right leadership. How could channels of accountability be created that were not prone to capture?

The role of the EU as an external intervener was also important; it needed to be, simultaneously, more ambitious and humbler. While it should ratchet up its review of RoL, it needed also to respect domestic realities and the vital role of domestic ownership of reform. Transparency was also key, particularly if suspicion of double standards was to be prevented.
Posted by SEESOX at 19:03