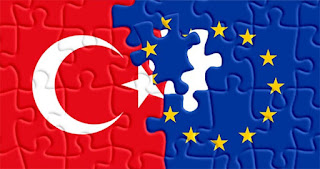 On 5 November 2020, “Oxford-Berlin Partnership: Migration Diplomacy and Turkey-EU Relations” project held its second online brainstorming meeting. The research project is carried out by SEESOX at the University of Oxford, Humboldt University, and the Berlin-based German Centre for Integration and Migration Research (DeZIM). The meeting was chaired by Othon Anastasakis and Mehmet Karli (both St. Antony’s College) and it brought together three speakers: Fiona Adamson (SOAS University of London), Ferruccio Pastore (Director of FIERI), and Juliette Tolay (Penn State Harrisburg).

Anastasakis introduced the project to the participants by referring to its aims: examining the issues related to Turkey’s foreign policy and the country’s relations with the EU in the shadow of the migration crisis, and also preparing an application for a larger research grant. He recalled the first online meeting that was held on 30 June 2020, which focused on the domestic drivers of Turkey’s migration diplomacy. The goal of the current meeting was to discuss and exchange views on the conceptual and historical perspectives on migration diplomacy, and the speakers and participants were prompted with the following questions:

- How do you conceptualize migration diplomacy?

- How is migration diplomacy linked with foreign policy making?

- What are the linkages between migration diplomacy and geopolitical considerations?

The first speaker, Fiona Adamson, presented answers to these questions by making references to the insights gained from her and Gerasimos Tsourapas’ work on the issue. She stated that the aim of migration diplomacy research is to expand the field of migration studies, and making use of classical IR theories to look at issues of interstate bargaining over migration; in other words, to understand how migration fits in interstate relations and geopolitics. She suggested a definition of migration diplomacy: state use of diplomatic tools, processes, and procedures to manage cross-border population mobility, and/or state instrumentalization of migration to achieve other diplomatic and strategic interests. Noting that migration diplomacy is not synonymous with migration policy, and that we are trying to limit the scope of analysis to interstate relations, she noted that we are taking a realist/rationalist focus on relations between states or state-like actors such as international organizations. A point that was emphasized was looking at how migration management relates to asymmetric power relations between states, and how it fits into interstate bargaining. States derive their interests both from their overall power and also from their position in the international system. In this framework, states hold differential positions of power in migration systems based on the extent to which they are sending, receiving or transit states. Borrowing from game-theory, Adamson suggested two different bargaining strategies between states: “relative gains (zero-sum strategies)” that take a coercive approach and where one party measures success in relation to the (weakened) position of the other party, and “absolute gains (positive-sum strategies)” that highlight mutual gains, and where both sides are expected to benefit from mobility, albeit to different degrees. She then explained the different ways in which migration diplomacy can be linked to other issues such as security, economy, and public diplomacy. Adamson ended her speech with several ideas for future research; for example, looking at the conditions under which the diplomacy is effective or not and how to define “effective” in this context, explaining the decline in the effectiveness of diplomatic schemes over time, and examining why states pursue more coercive vs. cooperative arrangements.

The third speaker, Juliette Tolay, shared her observations on migration diplomacy and insights from her own research on Turkey and migration diplomacy. Her presentation concentrated on four different issues in the study of migration diplomacy. The first one was temporality, which noted that migration diplomacy is receiving more scholarly attention today than ever before. Therefore, the speaker asked, is there something that is characteristic in the current system we have that leads to migration diplomacy to be more salient? The second issue was concerned with geography. Tolay claimed that there are two strands within the literature. On one hand, some scholars are extending previous analyses on the role of migration mostly in the EU foreign policy, and looking at the externalisation of migration in the EU in a migration diplomacy framework. On the other hand, some scholars focus on how countries in the Global South have used migration diplomacy with their neighbours and in their relationship with the EU. She emphasized that instead of focusing on one side or the other, focusing on the interaction is interesting, and there is also room for growth in the analysis of migration diplomacy in South-South relations. The third issue was the role of agency in migration diplomacy research, and the speaker commented that besides focusing on state relations, there is also complementary value in focusing on the agency of non-state actors and migrants themselves. The final issue Tolay drew attention to was positionality and the symbolic aspects of migration diplomacy. She suggested an alternative way to think about positionality other than considering migratory postures or regime types, which is thinking about the positionality different actors have in the post-colonial world and how they view the Western-centric world. Discussing the case of Turkey, she pointed out that understanding the symbolic and immaterial aspects of countries’ aims in addition to material benefits to be drawn can provide an understanding of states’ motivations, how they position themselves towards what they perceive as the centre of power, how they use that in that normative framework and present an alternative conception of the world order.

The presentations of the speakers involved suggestions for future research and were followed by a discussion among all of the participants. The comments made and questions raised touched upon a range of issues: looking at comparative studies and historical examples to illuminate the current issues surrounding migration diplomacy today, the role of NGOs in migration diplomacy, domestic political calculations that affect foreign policy making on migration, bringing in human agency into the equation, going beyond Eurocentrism in research in this area, the new factors under Covid-19, and the question of audience when thinking about positionality. At the end of the discussion, the co-chairs underlined that a main objective of this project is building a community of migration diplomacy scholars, and also to lay the ground for a more comprehensive research proposal that will probably not solely focus on Turkey-EU relations.