From the ashes of Moria refugee camp to a new migration system? 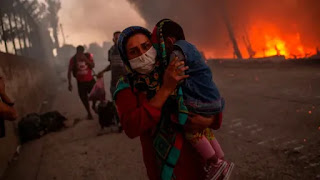 On 18 November 2020, SEESOX held the webinar ‘From the ashes of Moria refugee camp to a new migration system?’ with the aim of problematising the EU’s migration governance system and critically discussing the prospects for the new migration pact announced in late September 2020 in the aftermath of the Moria catastrophe. The seminar was convened by Foteini Kalantzi and brought together Angeliki Dimitriadi (ELIAMEP), Franck Düvell, (Institute for Migration Research and Intercultural Studies (IMIS), Osnabruck University) and Elzbieta Gozdziak, (Centre for Migration Studies (CeBaM),Adam Mickiewicz University, Poznań).

Dimitriadi began by exploring the circumstances and structural causes that made the Moria camp such a dangerous and inhumane place and led to its eventual destruction by fire. Moria was very much a product of EU policy and of the way the EU-Turkey Statement was structured and implemented. This, along with the unwillingness of other EU member states to show solidarity in relation to the relocation of refugees, resulted in significant pressure being exerted on Greece. Yet a large portion of the responsibility also rested with consecutive Greek governments which have approached migration as a problem that needs to be stopped through border control. They endorsed the so-called ‘deterrence approach’, i.e. the idea that conditions in reception centers should not be good to prevent further inflows, which helps explain why such inhumane conditions persisted in Moria. The situation was exacerbated with the toughening of migration policy in summer to 2019. This led to the further securitization of migration, while legislative changes were implemented to allow for quicker return decisions in the asylum process. Finally, the pandemic further worsened the already very poor conditions in hotspots. Dimitriadi described the new pact on migration and asylum as deeply problematic because in essence it replicates the model of Moria, while focusing on speed and numbers rather than the specific merits of each individual case and the needs of the asylum seekers. At the same time, it encourages Greece to continue down the path of deterrence and proposes that solidarity by other member states be ‘flexible’, with relocation, at least at ‘regular times’, optional. Hence, it leaves Greece to manage migration flows on its own, which means preventing as many people as possible from reaching its territory, effectively hurting those who need protection the most.

Düvell looked at actual migration movements on the ground before analyzing the structural causes of the Moria camp fire. He cited data showing that cross Mediterranean migration has greatly diminished in the past four year. He further referred to empirical evidence from surveys that he and his collaborators had conducted among refugees in Turkey and Lebanon and their aspirations for onward migration, which indicated that the increased inflows of 2015 were very unlikely to be repeated in the Eastern Mediterranean.

Hence the increased flows in 2015 should be seen as an exceptional situation caused by a number of simultaneous crises. Despite the fact that flows in that period accounted for only 0.2% of the total population of Europe, they brought about a crisis of reception and a consequent humanitarian crisis in Greece, the Balkans and other countries along the route. This migration was perceived as a problem linked to inefficient border control, which in turn led to a crisis over the integrity of the EU and its functioning, notably the Dublin Convention and the Schengen Regulation.

Düvell noted that the securitisation of migration in the EU had already begun in the 1970s but had acquired further momentum in 2015 and continued to be particularly strong. Currently, the EU migration governance system aims to stop all unwanted migration, including refugee flows and Muslim migration, while new levels of control were introduced during the pandemic when drastic measures were taken aimed at the complete halt of migration. He argued that the new pact on migration and asylum needed to be understood in this context.

In concluding, he assessed the pact against its own goals, arguing that it offered little new; failed to address racism and xenophobia and gave in to right wing and illiberal governments; it ian attack on refugees’ and migrants’ human agency; broke international principles and created new loopholes, grey zones and unrealistic timeframes; reinforces neo-colonial approaches vis a vis third countries; consolidated an apparatus of unaccountable agencies and established pseudo legal procedures to turn back people on a large scale and finally legalized the dehumanization of refugees. Overall, the pact showed little concern for the obligation towards people in need of international protection; it aimed to contain the global refugee problem outside of Europe and is instead a pact against unwanted migration and asylum.

In her presentation Gozdziak focused on the Visegrád Four (V4) countries and their views on the new pact on migration and asylum, especially Poland and Hungary, which have been the two countries that have opposed the refugee relocation system most strongly. In her view, some of the pact’s provisions seemed to cater for the demands of the V4, whose reaction to it can be described as mixed. She noted that the pact has been launched under the EU Commission’s fifth priority (the promotion of ‘our European way of life’), which is in turn a response to the 2015 increase in migration and refugee flows. As such, it was in line with what both Orban and Kaczyński sought.

Gozdziak underlined that the notion of ‘European values’ has been used to justify views and policies both against and in favor of migrants and refugees. On the one hand, those opposing migration propose the enforcement of anti-migrant policies to protect Europe, projected as a homogenous Christian entity, from being overrun by Muslims migrants and refugees. They also present migration as a threat to national security and to European visions of tolerance, freedom and democracy. Such highly problematic views silence the cultural and religious diversity in Europe. They also ignore the fact that the values of freedom and democracy have been fought for in Europe against the violent resistance of local elites, while ironically many of the refugees who are at EU’s threshold have fought for the same values and rights in their own countries.

On the other hand, ‘humanitarians’ appeal to a vision of Europe as cosmopolitan; a community of nations that have overcome War and fought totalitarianism. They suggest that Europe should be a beacon of hope, and push politicians to live up to this ideal. However, she warned that these aspirations risked remaining unfulfilled if we ignored the fact that, while the nations of Europe may have overcome war and fought totalitarianism, many of these same nations had also become rich and powerful by conquering and administering huge empires and, one might say, on the back of refugees as well. Such views could, she argued, be used to justify the idea of European racial supremacy, underling the paramount need not to forget the history of Europe.

Gozdziak noted that the EU commission had taken Hungary and Poland to the EU Court of Justice, which had ruled that they did breach their obligations as member states under EU law, but no penalties were enforced. On the contrary, the idea of ‘flexible solidarity’, which the pact introduced, was proposed as a direct response to the V4 demands. She further highlighted the differences between Poland and Hungary in terms of their experiences (or the lack thereof) with recent refugee flows and concluded with referencing civil society movements and rallies contesting government anti-migration policies in the two countries.