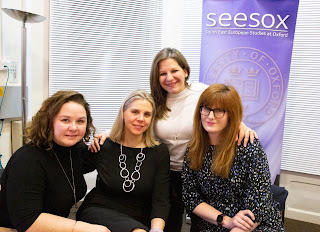 The third seminar of the Hilary term – on ‘The ‘Balkan Route’: Humanitarian and security perspectives on migration’ - took place on 5 February 2020. The seminar chaired by Foteini Kalantzi (SEESOX), focused on the migration-security nexus and specifically on the management of reception centres, the criminalisation of migrants, as well as the role and the profile of smugglers.

The first speaker, Amanda Russell Beattie (Aston University) based her presentation on fieldwork experiences on the Greek islands of Lesvos, Chios, and Samos in 2017 and 2018. She pointed to a deep sense of frustration in the effort to speak about accountability in relation to European policies. The main questions raised from the outset were how to engage activists as scholars and what theoretical tools to use to challenge the systems surrounding the reception centres. The presentation, based on an upcoming paper, engaged with a feminist theory challenging the perceptions of hierarchies and power, and discussions of order seeking to impose standard behaviours. The reception centres are spaces where certain groups of people are perceived and treated as more vulnerable than others, i.e. mothers with children, in contrast to men who are not part of this group; however there are people, irrespective of their gender, who face physical and mental health challenges.
Viewing the reception centres, and their surrounding overflow spaces, as a diasporic space challenges this perception, recognising that there is fluidity and disorder within vulnerability and that it is impossible to enforce a fixed way of behaviour. The speaker described a variety of aspects of the reception centres, i.e. everyday life, the boundaries that have been created with padlocks and barbed wire fences, the violence associated with the system of migration and asylum management - a space characterised by chaos, where there is constantly motion, crisis and emergency. The goal was to problematise the traditional use of space, elaborating on the intersection of diaspora, border and dislocation as a point of confluence of economic, political, cultural and psychic processes. The presentation also drew upon Lorde’s interpretation of the erotic, whereby there is a particular relational ontology rooted in human difference extending into community. This theoretical foundation was used in order to explore the ways that relationships are governed in these spaces.

The second speaker, Gemma Bird (University of Liverpool), drawing upon empirical research from Athens, Belgrade and the Aegean islands of Samos, Lesvos and Chios, employed the idea of the urban ‘badlands’ (Dikeꞔ, 2007) in order to shed light on different types of housing available to refugees. She contrasted formal refugee housing, such as “reception and identification centres”, with informal sites, such as squats in the centre of Athens. The main question at the epicentre of her analysis was: ‘Why, given the poor conditions of most refugee camps, are they still viewed as the best solution to housing?’ The argument that ran throughout the presentation was that wider EU and national policy frameworks define the relationship between refugee camps and informal housing. She described the evictions from a number of squats in central Athens, particularly in the Exarcheia neighbourhood. She stressed the intended temporary nature of “reception and identification centres”, which have been designed to house people for a short time; however, since the Turkey agreement people spend a lot of time in these spaces. In contrast, residence in squats can be better than in overcrowded places with bad sanitation, such as the “reception ad identification centres” of Samos, Kos, Lesbos, Chios and Leros. On the other hand, when people reside in squats, they don’t have access to support associated with the asylum system, such as non-emergency healthcare – there is thus a choice to live outside the system. Informal housing, or squats, are often represented as components of the urban ‘badlands’, whereas “reception centres” are, as presented through policymaking, seen as safe and ‘appropriate’ spaces for refugees and the EU, local and national authorities restrain or ban provision outside these spaces. Also, camps are a top-down project organised by formal authorities, whereas informal housing is usually implemented from the grassroots.

The third speaker, Myriam Fotou (University of Leicester) spoke about the representation of the migrant smuggler in a monolithic way in a context of an increasingly repressive narrative, of externalisation of border management and of criminalisation of the refugee crisis. Initially, she described the global phenomenon of migrant smuggling and raised issues such as fragmented data, the overbroad definitions of the international anti-smuggling legal frameworks (UN Palermo Protocol and the respective EU directive), the differentiation in application, prosecution and punishments between various national legislations, and the role of family and community-based networks. She stressed the point that empirical research does not substantiate the account of organised crime and entrepreneurial business, while there is only fragmentary data from national records, Frontex and Europol; this is problematic and relies largely on estimations. The main question that she raised was whether smuggling constitutes a crime or a tool of deterrence. She cited examples of different cases of the vague definition of smuggling, leading different countries to address them legally in diverse ways. The core argument of the presentation was that the criminalisation of migrant smuggling is unethical, ineffective and unnecessary. She further argued that this criminalisation has compromised the ability of individuals to access protection, has been conducive to an increase in the lethality of crossing, and shows lack of interest in the welfare of migrants. In addition, she focused on how the migrants perceive smugglers. Those interviewed do not always share the depiction of smugglers as villains – they consider them as a necessity, or they do not differentiate them from local state officials, consider both as actors profiting from migrants, or they may say that are often migrants themselves or a family member, kin, etc.

There was a vibrant discussion in the Q&A session, focusing on the inefficiency of the prospective closed reception centres, seen as riskier but, at the domestic level, as vote winners. In addition, the relations between the locals and the migrants/refugees, were seen as having significantly deteriorated (an example that was raised were the schools, which are not a viable option); five years ago communities were willing to help, but now the situation had changed – the overcrowding and the problematic situation has had a huge effect on the way the community responds to the issue. Additionally, questions revolved around communication between reception centres; the numbers of people crossing the so-called Balkan route, and comparisons with the Mexican border. Finally, there was criticism of the nomenclature of the routes (i.e. Balkan route, Eastern Mediterranean route) which represent essentially Frontex ‘imaginations’, while the ‘open borders’ solution was favoured. As a general comment, the need was expressed for renegotiation and reimagination of the idea of borders.