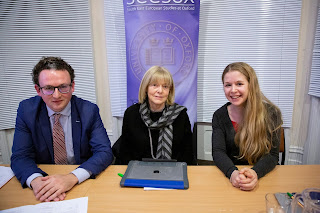 The background was the 2013 Brussels agreement between Kosovo and Serbia which provided much hope for a workable relationship between the two countries. But, despite much technical progress, political relations between Belgrade and Priština had deteriorated since then.

Ian Bancroft, previously an advisor to the OSCE and coordinator for the north for the EULEX mission in Kosovo, outlined a detailed and complex set of technical issues that prevent people in Kosovo from having a ‘normal life’. He stressed that after 2017, any previous progress – in policing, civil protection and civil registration – was effectively halted. As the political dialogue has been led at top political levels without any meaningful inclusion of the civil society or citizens, for ordinary people, engagement with the ‘other side’ is still difficult. Formal collaborations such as university projects or teachers’ workshops even poses professional threats. Instead of having a centralised and controlled dialogue between the top political echelons, Bancroft argued for a be multi-levelled approach across different sections of society. Bancroft pondered over the chances of the new Kosovo government of Albin Kurti from Vetevendosje to offer a new restart and re-programme the dialogue. He outlined how Kurti ‘hit political reality’ after entering government and how he had to backtrack on some of his previous promises and red lines. ‘Reunifying Mitrovica is hardly feasible’, Bancroft stated. Instead of investing all cards in externally brokered relationships restoration, Bancroft supported local ideas and initiatives such as border-free trade in the so-called Mini-Schengen that would open up some areas of workable cooperation and mutual benefit. Ultimately, Bancroft concluded, these issues are no longer as much about the war (though that is still relevant) but about the lack of prospects and opportunities that force the young Kosovan population outside. ‘I don’t hear people talking about the war. But everyone is talking about leaving. And they all learn German’, he stressed.
According to Jessie Barton Hronešová, ESRC Postdoctoral Research Fellow at ODID, the bottom line of the Kosovo/Serbia conundrum is that Kosovo is in a standstill until Serbia makes concessions; Kosovo’s stakes are higher. The land swap idea in August 2018 did not gain public legitimacy but it was a realistic proposition to finally get out of the current deadlock for Kosovo. As Serbia’ EU prospects are now far removed, it is Kosovo that has more to lose from the current status quo. Barton Hronešová also focused on the wider international context and the different stakes involved in the current dispute. She argued that the key low-hanging fruits have been achieved to varying degree as already outlined by Bancroft (e.g. registers) since 2013. She noted that on paper, things look much better than in reality as implementation is seriously lagging behind – especially in terms of integrated services in Kosovo. While 2013 saw an active and constructive involvement of the European Union, the situation in 2020 is dramatically different, with many other actors getting involved in the process – the United States but also Russia. The EU on the other hand is struggling with it internal and external legitimacy. Barton Hronešová was sceptical that the US cowboy-style diplomacy of tit-for-tat and direct economic pressures would unlock the process. She concluded that a more step-by-step process currently seems more feasible.