Energy dynamics in the Eastern Mediterranean: Cooperation or conflict? 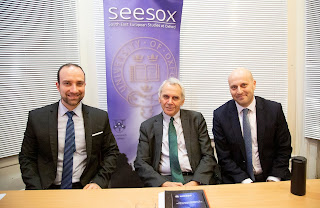 On the 12th February, SEESOX hosted a panel on Energy Dynamics in the Eastern Mediterranean, a region rich in hydrocarbon reserves, territorial and maritime border disputes and regional power politics. Once believed to be a catalyst for peace and cooperation, such resources have recently become the source of tensions and disputes not just among the states in the region but involving other countries further afield as well as international companies engaged in explorations. The panel was composed of Bill Kappis, Deputy Director of Security and Intelligence Studies at the University of Buckingham, and Okan Yardimci, academic visitor at SEESOX and St Antony’s College. Both speakers responded to the question whether energy dynamics in the Eastern Mediterranean is a source of cooperation or conflict.

Bill Kappis began by looking at the underlying causes for the current turmoil in the Eastern Mediterranean. In his view it is not energy per se that bolsters or compromises relations between countries, but power politics and the current balance of power in the region, although the danger of energy competition per se should not be underestimated. Energy is an accelerator of competition but not the cause of it. He discussed the current state of play in the region, in Syria, Libya and the maritime region of the Eastern Mediterranean, and the competition over energy resources available. He also talked about the current competitions among states that have to do with the rights to exclusive economic zones and the delimitation of territorial waters. He pointed to the fact that the Eastern Mediterranean is not the only contested maritime area; there are other similar cases like the South China Sea. He mentioned that the current EU energy mix between oil, gas and other fuels and renewables has remained unchanged compared to past decades, despite environmental concerns, while competition over oil and gas resources in particular continues unabated.  But the source of competition really lies in the shifts of power and, in the case of the Eastern Mediterranean, Turkey has become a rising and demanding regional power, due to its impressive economic growth since the 1980s, its increase in GDP per capita, its rising military spending, and the population density of the country, especially when compared with other coastal states in the Eastern Mediterranean, like Greece or the North African states. He also pointed to potential flashpoints in the future - Cyprus, the Aegean, the Lebanese and the Libyan exclusive economic zones.


Okan Yardimci stressed the nature of energy dynamics as a source of cooperation rather than competition, and looked into the more technical elements of energy needs and explorations as a source for Turkey’s economy. He saw the existence of hydrocarbon resources as a key to solving problems and pointed to Turkey’s need for energy resources as a major consumer but not a producer, and how dependency on Russian gas is a major motivation for Turkey’s exploration in the Eastern Mediterranean but also the Black Sea, where Turkey is ready to start relevant operations. He also pointed to the differences between the two regions, by emphasising the competition among states in the Eastern Mediterranean and the level of cooperation and settled relationships in the Black Sea. He then discussed the overlaps emanating from the countries’ continental shelves in the region and compared the Greek and Turkish claims in the Aegean and the Eastern Mediterranean, or the more recent disagreements over the Libyan-Turkish agreement, with other cases of similar bilateral claims elsewhere, and how these were gradually resolved.  Contrary to Kappis, Yardimci emphasised that Turkey’s major energy motivation is economic and the country’s need to find what is lying in the ground.

In the question and answer session the two speakers expanded on other issues. Bill Kappis raised the inability of the EU to address the Greece Turkey dispute and how NATO has become rather idle in this case. For Bill, US retrenchment is an important factor in the rise of competing interests in the region, exacerbated by the EU’s more generic inability to deal with the various crises in the Middle East. Okan Yardimci commented on the involvement of international oil companies, which complicates relations between states in the region; France with Total, or US Exxon Mobile, and the intervention of other oil companies from third states with their own aspirations and interests, confuse bilateral relations between states.