EU referenda in Greece and the UK: Questions of legitimacy 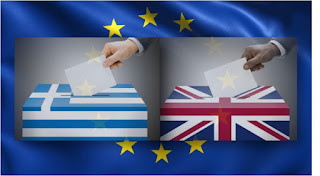 On 30 January 2020, Evangelos Fanoulis (Department of International Relations, Xi’an Jiaotong-Liverpool University) presented his research on how to assess the legitimacy of EU referenda, using two recent referenda as reference cases: the 2015 Greek referendum on whether to accept a new bail-out programme, and the 2016 UK referendum on Brexit. Although legitimacy is not a sufficient condition for democracy, it is a necessary one; and the legitimacy of referenda is a salient topic for the future of European integration. Kalypso Nicolaidis (St Antony’s College) chaired the talk.

His central message was that EU referenda—meaning, nationally held referenda on a question relating to EU integration, politics, or policy-decision-making—should be assessed for legitimacy at both national and supranational levels, looking at questions of justice and freedom, and taking account of the type of referendum.

His framework for assessing legitimacy differed from other assessments, being based on agonistic democracy. Prior research on EU legitimacy had looked at either input or output legitimacy, and/or presented legitimacy as either a top-down or bottom-up process. In contrast, agonistic democracy saw public contestation as a prerequisite for legitimacy. Citizen participation was the sine qua non of agonistic pluralism: citizens should have an effective say in democratic politics—with governments obliged to reply if they did not abide by citizens’ views. He noted that this version of agonistic democracy is based on Tully’s approach rather than Mouffe’s, making room for multinational democracies and envisaging the democratic game (agon) taking place within an equilibrium of law and freedom.
The EU is a multinational polity in the making, so the democratic game entails multiple levels and rounds. To assess legitimacy, the rule of law and democratic freedom must be assessed at both national and EU levels, and all concerned parties need to have an effective say. In the EU, the impact of legitimacy ‘travels from national to EU level’.

Moving to the case studies, and starting with the Greek referendum — with the intention of evaluating the organization, conduct, and post-referendum political implications – Fanoulis recognized at least three players at each level. In Greece, there were Yes voters, No voters, and the Greek government, and at the EU level, there were the Greek government, other member state governments, and citizens of other EU states. He examined problems of legitimacy at both levels.

Within Greece, No voters were dominant, so the Greek government was tasked with transferring this message to the EU level. But already at the national level (partly because the debate was rushed), the dominant public demand got distorted in the negotiations, and the Greek Government ended up accepting a tougher bail-out program. At the EU level, though other member states’ citizens had a vested interest in voicing their views — since EU interdependence is so great that that what happens in Greece affects other member states and their citizens as well — they were given no opportunity to voice their preferences. Both of these shortcomings implied a negative impact on the legitimacy of this EU referendum.

Unlike in the Greek case, there was a big public debate in the UK: i.e., agonistic democracy was allowed to flourish. Problems with legitimacy arose only later, during the transfer from national to EU level. Problems in the transfer did not relate to transferring the will of the people — which the UK government did succeed in doing. However, the need to respect the demand of the British people for self-determination should have been combined with a process which took account of the wishes of citizens of other states. Although citizens of other states would be affected by Brexit, they were given no opportunity to express their opinions.

Drawing conclusions from the two cases suggests that there is no one-size-fits all approach to evaluating legitimacy. A potential critique may come from scholars and practitioners who argue that output legitimacy still plays a central role in EU democratic politics.

The presentation led to a lively debate, kicked off by Nicolaidis, who congratulated Fanoulis on providing a framework that changes the way we look at the legitimacy of referenda. The concept of agonistic democracy is closely allied to the Nicolaidis concept of demoicracy. Both approaches tackle the problem that aggregative democracy by definition suppresses the citizenry’s voice — as does any majoritarian system. For this reason, extreme care should be taken in judging any referendum on the basis of outcome. But, somewhat conversely, both approaches explain why national vetoes are important, notably for big decisions such as Brexit. In cases of national sovereignty such as Brexit (and arguably also in the Greek referendum which was also concerned with self-determination) it is not clear that all EU citizens should have been given equal voice. Although agonistic democracy entitles all to be given a voice, commentators emphasized the need to take relevance and intensity of preferences into account. They also suggested that criteria for legitimacy might differ for referenda on different topics. Moreover, consideration should be given to the voices of additional players — such as national opposition parties.

Commentators also emphasized the need to assess the legitimacy of referenda with reference to whether alternative tools might have served democracy better; it may not always be legitimate to decide by referendum. For instance, it was not clear that Brexit voters had adequate economic information or technical capacity to assess the consequences of a Yes or No vote. Fanoulis acknowledged that referenda should be a last resort, and that the primary criterion of legitimacy in agonistic democracy — that all voices be heard —may not be sufficient. He has suggested instead pan-European referenda but with multiple choice questions rather than Yes/No answers, and with flexibility on how legally binding various referenda are.