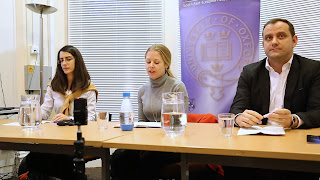 Radicalisation in the Western Balkans is often portrayed as the growing influence of radical Islam. Does this stand up to rational analysis and how do political and social factors fit in? These were some of the questions that Asya Metodieva (Central European University) and Florian Qehaja (Kosovar Centre for Security Studies) tried to address during the seminar on Radicalisation in the Western Balkans: Political, social or religious?, which took place on 29 January 2020 and was chaired by Jessie Barton Hronesova (Queen Elizabeth House, Oxford).

Qehaja explained that there were a significant number of foreign terrorist fighters (FTFs) coming from the Western Balkans and noted that there are different kinds of radicalisation and extremism in the region - driven by the Orthodox Church, by nationalism, etc. The issue of radical Islam in the Western Balkans came about after the conflict through a wave of NGOs using the post-conflict environment to promote non-indigenous to the region ideologies.

While the roots of radicalisation were slightly different in the various countries in the Western Balkans (e.g. depending on whether the country is secular or influenced by the Orthodox Church), in the end they were quite similar. Identity crisis of the individual, corruption, state capture, loss of hope and protagonism were all roots of radicalisation. 40% of the Kosovo FTFs had some sort of criminal background, which made them easy targets for recruiters. Enlargement fatigues also gave ammunition to recruiters and allowed them to argue that the West is not the answer for the future.
Qehaja pointed to the lack of proper security cooperation between the Western Balkan countries, caused by political positioning and conflicts in the region, as an obstacle to positive developments. Despite this, a lot had been achieved in the region in the last five years, especially in terms of providing information, raising awareness and building resilience. The role of the family, of local communities, a strong national identity element and secularism are factors that counteract the appeal of recruiters. The repatriation by Kosovo of 110 FTF family members was also a positive step, however there might be potential problems due to lack of capacity to monitor the returnees.

In terms of possible improvements for the future, Qehaja suggested that local and Muslim communities should be involved more. There was a need for greater mobilisation of municipalities and community leaders and it was important to refrain from using alienating and stigmatising language.

Metodieva focused her presentation on the specificities of radicalisation in post-conflict societies and the role of mid-level leadership in the recruitment process. FTFs were just the tip of the iceberg, the final step in a long process, which had sometimes taken years to complete. It was in this process of creating radical communities and providing them with a sense of identity that that the role of mid-level recruiters as the driving force of the radicalisation process could truly be seen.

Radicalisation in the Western Balkans was the result of the combined effects of framing and context. The post-war period, characterised by the destruction of the welfare system and lack of opportunities, had led to the creation of fragile societies and an identity crisis within society. It was in this context that recruiters could build radicalised micro-societies.

This was confirmed when looking at the geography of FTF mobilisation in the Western Balkans. That mobilisation followed the trajectory of recruiters who were active and present in the region and who had managed to build domestic networks. Metodieva stressed the importance of mid-level leadership in creating informal structures and in building a trust relationship, so that radicalised people would turn to them in case of need, rather than to their family, a teacher or the official authorities. The role of local recruiters included not only preaching, but a variety of other functions, such as maintaining influence at community level, providing logistical and financial support and building an image of spiritual authority.

Metodieva concluded her presentation by summarising her four key hypotheses: radicalisation in the Western Balkans was the by-product of war and post-war fragility; targeted activity of mid-level leaders had led to the appearance of radicalised micro-communities; global ideologies were translated to the local war/post-war context; the FTF phenomenon depended on the existence of active positive relationships with the local leaders.

In the discussion that followed a number of issues were raised, such as whether there are specific characteristics common to people who become radicalised; the differences in the radicalisation process in the different Western Balkan countries; the stance of official Islamic institutions towards radical imams; the role of Turkey, Russia and China in the region; prevention mechanisms; the role of the diaspora; Orthodox right wing, nationalist and ethno-nationalist extremism.