Bosnia and Herzegovina: Has the international community lost the plot? 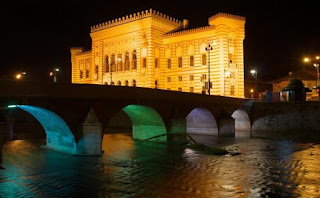 On February 23 SEESOX held a panel discussion on recent political developments in Bosnia and Herzegovina (B&H) and the role of the international community. As indicated by moderator Jesse Barton Hronesova, a postdoctoral fellow at the University of North Carolina-Chapel Hill and Ca’ Foscari University, the panel took place amidst one of the largest political crises in B&H, whose constitutional framework is being challenged in at least two respects. These include the increasingly secessionist rhetoric by Bosnian Serb member of the B&H presidency, Milorad Dodik, but also the insistence for comprehensive electoral reform by ethnic Croat leaders, who argue that they are inadequately represented in the presidency, where the ethnic Croat member of the presidency is elected jointly by ethnic Croats and Bosniaks alike.

The panel addressed at least four key aspects of the topic. The first one relates to the actions of local actors and what their long-term goals and strategies might be. The panelists expressed a joint concern about the lack of care among local leaders about the negative effects of ethnocentric rhetoric on B&H’s already fragile political structure. Jelena Dzankic, a part-time professor at the European University Institute, reminded the audience that B&H’s power-sharing constitutional framework has been vulnerable to ethnic entrepreneurs from all three dominant ethnicities ever since its creation with the Dayton Agreement in 1995. Nebojsa Vladisavljevic, a professor at the University of Belgrade, pointed out that ethnocentric leaders have their own vested interests in preserving B&H in its current format, given the expected lack of international tolerance for any unilateral action on the ground, but also because their political fortunes have already thrived despite – and perhaps because of – B&H’s power-sharing structure. Yet, Jasmin Hanic, an assistant professor at the Sarajevo School of Science and Technology, expressed his concern about the recent lack of cooperativeness by ethnic Serb actors even in legislative areas where they have traditionally acted in a constructive fashion. Moreover, all speakers acknowledged the increasing autonomy of local leaders from the High Representative and other international actors, which carries a range of risks but also opportunities. In this context, Dejan Jovic, a professor at the University of Zagreb, highlighted that all domestic actors, including ethnic Croat politicians, have a legitimate right to articulate their political demands, as long as this is done through the institutions of the system.

The second key area of discussion relates to the role of the two “kin states” surrounding B&H: Croatia and Serbia. In this regard, Prof. Jovic problematised the increasing involvement of Croatian politicians, not least in the European Parliament, in the electoral reform debate, as well as Croatian President Zoran Milanovic’s opposition to international sanctions against Mr. Dodik’s unilateral actions. As for Serbia, Prof. Vladisavljevic highlighted the competing interests of Serbian President Aleksandar Vucic, who is seeking to keep some distance from Mr. Dodik to avoid alienating the West, while at the same time using their relatively close relationship to score political points among his own voters.

The third key component of the panel addressed the past and current role of the West. While cautiously optimistic about the increasing autonomy of local actors, the speakers also warned against the dangers of excessive passivity among international actors, with Prof. Hanic describing former High Representative Valentin Inzko as a “sleeping beauty”. Prof. Vladisavljevic remarked that the growingly hands-off approach by the EU is a broader policy failure by Brussels towards the region, especially through its “stabilitocratic” tolerance for less-than-democratic leaders. Prof. Dzankic noted that more clarity is needed about the exact division of roles between international actors, as many of them have overstepped or misused their formal mandate.

Finally, the speakers also tackled the role of Russia. Prof. Jovic argued that the Western Balkans Six are, in fact, a “Western Balkans Two” in the eyes of Russia, which is following developments in Serbia and B&H very closely, as Putin’s relationship with Belgrade has traditionally been an important element of his foreign policy agenda. Prof. Vladisavljevic added that events in Ukraine might draw more attention to B&H without necessarily posing a threat to B&H’s survival, as Mr. Vucic and Mr. Dodik have already shown their ability to react to changing external circumstances and adapt them to their presumed long-term interest of avoiding full-blown escalation in B&H.

Kristijan Fidanovski (Department of Social Policy and Intervention, University of Oxford)
Posted by SEESOX at 14:18