What’s in a name? The classical Greek and Jewish diasporas and their implications for the present 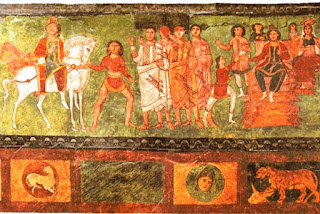 On 2 February 2022, SEESOX hosted the first of its 20th Anniversary Seminar Series, as an online webinar, on What’s in a name? The classical Greek and Jewish diasporas and their implications for the present. It consisted of a conversation between Robin Cohen (Kellogg College, Oxford) and Manolis Pratsinakis (Centre on Migration Policy and Society – COMPAS). The session was chaired by Renee Hirschon (St Peter’s College, Oxford), with Othon Anastasakis (SEESOX) as co-chair.

Cohen began by pointing out the timeline of the classical Jewish diaspora, beginning with the destruction of Solomon’s temple in 568 BCE, through the founding, in 332 BCE, of Alexandria - a city whose Jews constituted more than a third of the population. The term “diaspora” had been attributed to the translators of the Bible into Greek in the Third Century BCE. He pointed out that, at the time, the Greek colonies in the Mediterranean and Black Sea broadly overlapped with the concentrations of the Jewish diaspora.

Noting that Thucydides had used the term “diaspora” with reference to dispersions of Greek populations, he wondered how distinct the two diasporas – Jewish and Greek – actually were. He felt that the Jewish diaspora often tended to be mischaracterised as linked solely to the dispersion after the destruction of Solomon’s Temple; in fact, while 25% of Jews went to Babylon, 75% remained in Judea and many later went elsewhere - to Alexandria and to the rest of the Mediterranean. Thus, the Jewish diaspora was in part involuntary and in part voluntary, thus resembling the Greek diaspora to some extent. The term “Greek civilisation” was an 18th Century invention; could diaspora likewise be used retrospectively?Pratsinakis wondered whether the study of the past helped to interpret and inform the study of the present and vice versa. He started his talk with reference to Xenophon’s famous work Anabasis, to highlight how, in the classical period, the Greek world stretched across the coastal lines of the Black sea and the Mediterranean. At that time sea itself was associated with “Greekness”. A network of some 280 Hellenic settlements, composed of migrants from the Greek city states, had formed for a variety of reasons, often as a result of private initiative, rather than organised by the state. Migration was both voluntary but also enforced. As he noted, being Greek seems to have implied facing the possibility of displacement at some time.

Although the term “diaspora” was employed by Thucydides, his use differed from the term’s current understanding. Pratsinakis defined a diaspora as any population that exhibits dispersion, a separate identity, and some orientation towards a homeland (in the case of the Hellenic colonies, the city state), This is a definition that departs from those understandings of the term that link it closely to a certain interpretation of Jewish history. If such a definition is used retrospectively to describe the Greek world in classical time one would have to speak of a polycentric diaspora.

Hirschon noted that terminology is politically complex, citing the reluctance of some to talk of an Armenian genocide alongside the Jewish genocide; or the distinction to be made between colonisation and diaspora.

Cohen wondered how far the link to an undefined homeland was not also true of the Jewish diaspora, at least prior to the foundation of the State of Israel. Perhaps it was better to think of a link to “place” rather than a country or a state - Jerusalem, or Athens? He warned against understanding a particular word, whether genocide or diaspora, as a concept frozen by one particular interpretation based on one particular historical context.

Pratsinakis suggested that diaspora studies constituted a subset of the study of transnational communities; the latter included diaspora studies, but the two were not coterminous.

Cohen concluded that the term “diaspora” implied a degree of continuity over several generations, also having a network aspect.

In the Q & A, a range of issues was explored. These included:
Jonathan Scheele (SEESOX Associate and Blog Editor)
Posted by SEESOX at 13:31