Venizelos: Crete to Athens, The Great War and schism, Peace Conference and after 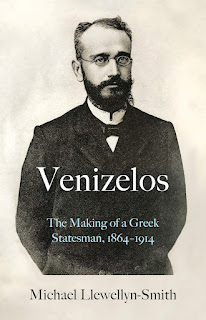 Dr Michael Llewellyn Smith spoke on this theme at a SEESOX seminar on 16 February, on the occasion of the publication of the first volume of his biography Venizelos: the making of a Greek statesman 1864 to 1914, and the reissue of Ionian Vision. The discussants were Othon Anastasakis, Director of SEESOX, Marilena Anastasopoulou (St Antony’s and Worcester), and Helen Katsiadakis (Academy of Athens). David Madden (St Antony’s) chaired.

Michael Llewellyn Smith noted that 2022 was the 100th anniversary of the Asia Minor catastrophe and interest in Greece was already building up on Venizelos, the disaster, and in particular on who was to blame. He would concentrate on two themes: the early career of Venizelos, particularly in Crete; and the Asia Minor catastrophe. He would seek to answer three questions: what of Venizelos’s time in Crete bore on his later career? When did Venizelos first consider venturing into Asia Minor? And what caused the catastrophe?

Venizelos was Cretan in his bones: it was 45 years before his definitive move to Athens. And Crete was his apprenticeship in politics as a deputy in the Cretan assembly, in journalism, and in legal practice: the last in particular bringing him into contact with other groups (Muslims, Jews etc). He inherited Greek citizenship from his father, who was slow to allow him to attend Athens university, where he studied law, enlarged his friendships and gained the legal knowledge which allowed him to write two Cretan constitutions, and later a Greek Constitution. Venizelos was in too much of a hurry to master Cretan politics: but his clash with Prince George, the High Commissioner of the great powers, got him noticed in Athens, especially by the junior officers; and their take-over in 1909 took him to Athens and opened the way for the rapid development of his political career. A massive majority allowed his new constitution, an alliance with Serbia and Bulgaria in the Balkan Wars, and the beginnings of a focus on Greater Greece. Thrace was clearly in his sights, but Asia Minor was unattainable at that stage. It was the Great War, and the Paris Peace Conference which opened that door. The Greek landing produced the first problems, with loss of life. The writing was already on the wall in 1920, with the growing strength of Kemal and reluctance of Allies to support. Venizelos lost the 1920 elections, and Gounaris took over, confronting critical difficulties.

There were three factors for the 1922 catastrophe: the finances of the Greek state were inadequate; geography and ethnography were against Greece; and the Allies, except the UK, gave no help – and the UK lacked sufficient power or interest to give Greece sufficient support in Anatolia.

Kemal was able to harness national feeling to repel the Greek invaders.

Othon Anastasakis focussed on the dramatic political circumstances surrounding the life of Venizelos; his building up of Crete as a centre of national importance; his leadership skills as visionary, realistic, responsible; and his brand, combining radical and antagonistic, insider and outsider, nationalist and modernising. Why did he not use his foreign diplomacy skills with domestic opponents!?

Marilena Anastasopoulou described the book as a rare attempt to provide a rounded picture of Venizelos. But he was and remained a divisive figure. He favoured both territorial expansion and modernisation. How consistent were these?

Helen Katsiadakis focussed on his avid reading and innate intellectual capacity – he had an astounding breadth of knowledge for someone who never travelled beyond Athens until 1910. This gave him great confidence and ability to gain the trust of representatives of the great powers: almost arrogance because he felt he could take on anyone and win.

Michael Lewellyn Smith added that he was divisive personally as he found it difficult to acknowledge anyone else as his superior. But he also sought be on side of those he saw as the Great War winners. He wanted Asia Minor to become a model European modern state.

The Q&A session developed some of these themes further: divisions in the Entente, role of Lloyd George, the state of turmoil in Europe and Ireland, some voices in Greece pro Central Powers, Venizelos not a Republican etc.