Turkey – Russia arms deal: What can NATO do? 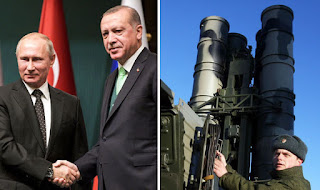 The seminar that took place on the 13 November at SEESOX focused on Turkey's recent purchase of S-400 missiles from Russia and its implications on security and defence within NATO borders. Dr Ziya Meral who is a Senior Resident Fellow at the UK Army's internal think tank, Centre for Historical Analysis and Conflict Research, began his talk by perusing the current issues, trends and threats that the NATO faces in general. He then elaborated on what these challenges and trends mean for NATO's relationship with Turkey, which has the second-biggest military within the alliance. Turkey's recent arms deal S400 with Russia has recently become one of the main contention points among the NATO allies, but it is not the only one. Meral argued that Erdogan had sought NATO's support on several fronts before the purchase of S-400s but was disappointed by the lack of reflexivity from the alliance. He gave Erdogan's speech at a 2016 NATO Summit in Poland as an example during which Erdogan stated, 'I told him [NATO Secretary-General Jens Stoltenberg]: 'You are absent from the Black Sea. The Black Sea has almost become a Russian lake. If we don't take action, history will not forgive us." According to Meral this incident was the first among many that pushed Turkey away from NATO. The second significant event, according to Meral, was the widespread conviction within Erdogan's party that NATO officials tacitly condoned 15 July coup attempt in Turkey.

In contrast, Russian intelligence had provided information to the Turkish government that night to botch the coup incident. The third incident Meral mentioned was the reluctance of NATO countries in acknowledging Kurdish YPG in Syria as a terrorist organization whereas Turkey considers the group as an offshoot of the PKK – the Kurdish militant organization which is fighting the Turkish state since the end of 1980s and designated as a terror organization by both the US and EU. After giving this background picture with respect to the fallout between Turkey and NATO, Meral argued that containment of this crisis is our best option and that Turkey while maintaining working relations with Russia due to the Syrian civil war spill-over, also needs to balance its relationship with NATO. According to Meral, in practical terms, the purchase of a limited number of S400 missiles does not mean a grave vulnerability for NATO's security and that Turkey is a vital ally for NATO. He also underlined the fact that Turkey continues to be committed to NATO operations, still hosts critical NATO assets, and still maintains its soldiers and diplomats across alliance structures. As the discussant of the seminar, Sir David Logan, who was British Ambassador to Turkey from 1997-2001 and he has been Director and consultant to a range of British, Russian, and Turkish companies, agreed with Meral on the arguments he put forth. Despite mentioning that Cyprus gas dispute – a diplomatic crisis between Turkey, Cyprus, Egypt, and Greece on carrying out gas exploration in the Eastern Mediterranean – may contribute to an escalation of tension between Turkey and NATO, he concluded that Turkey and NATO are indispensable to each other.