The Last Bluff: How Greece came face to face with financial catastrophe and the secret plan for its euro exit 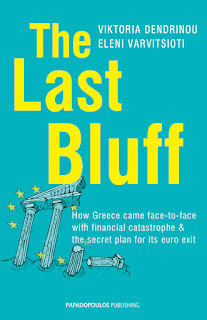 On the 4th of November, SEESOX hosted a panel on the latest book by Viktoria Dendrinou and Eleni Varvitsioti “The Last Bluff: How Greece came face to face with financial catastrophe and the secret plan for its euro exit”. The book deals with the calamitous events of 2015 when Greece, at the precipice of economic disaster, came close to exiting the eurozone under dramatic circumstances and amid confrontational politics between the country and its European partners.

Viktoria Dendrinou started the discussion by explaining how the book came about, why the two authors chose to deal with this topic and how they had to revisit every day of their own work at the time based on emails, notes and opinion pieces in the context of their reporting for newspapers and Greek television channels from Brussels. One of the great values of the book is its reliance on a number of interviews with some of the actors who played a pivotal role at the time. Eleni Varvitsioti in her presentation expressed the two authors’ opinion that the EU and the Greek side, while dealing with a mainly economic matter regarding the country’s survival in the eurozone, ended up in a much more political confrontation: both during the process of negotiations with the government of SYRIZA, and also during the last stages of the final settlement.
In addition, it was pointed that during the months leading to July 2015, the month of the Greek referendum, the EU was surprisingly united vis a vis Greece; even the countries of Southern Europe, which faced similar problems and grievances towards the European North, were all unified in their hard stance towards Greece’s negotiating tactics. At the same time, each and all of the eurozone member states had to take into consideration their own domestic politics when dealing with the Greek problem. The authors pointed to the role of personalities in this process and what the different actors at the time brought to the negotiating table. It was also observed how often rules were broken and the EU acted in a purely transactional way. One of the original findings in this book, which came out of the interviews, were the linkages and the quid pro quo introduced between Greece’s salvation within the eurozone and the issue of the Macedonian name dispute: Greece was led to believe that flexibility over the latter would help with the former.

Tim Vlandas, as discussant, pointed to the impressive and detailed information in this book and acknowledged how gripping the narrative was dealing with this fascinating period. Based on the facts narrated in the book, he extended the conversation on what such breakthrough developments like the Greek near exit, and the way these were handled, meant for the process of the European integration project from a political economy perspective but also for the sustainability of democratic politics.