Albania’s “noncompetitive” elections: A means to what end? 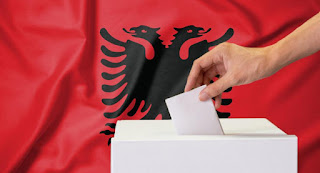 On 7 November, Gjoralin Macaj of the University of Leiden led a seminar on the local elections that took place in Albania on 30 June, 2019. These covered the mayoralties and councils of the 61 Albanian municipalities.

Dr Macaj gave the background to the elections, which were held against a background of continuing opposition protests. Since February 2019 the opposition had been boycotting parliament, citing corruption and vote-buying by the Prime Minister Edi Rama. President Meta in early June canceled the local elections scheduled for 30 June, citing public safety concerns, and shifted them to take place in October. Parliament, however, rejected this cancellation, and continued preparations for elections on 30 June. The election commission, which by law should have a balanced political composition, was unable to fulfil this due to opposition boycott, and therefore comprised only the government nominees, a bare quorum. The President again sought to postpone the elections, but the government continued with their preparation, using government officials where local opposition officials prevented preparations through the usual channels.
The main opposition party boycotted the elections, so that in 31 municipalities the ruling party was unopposed; in the other 30 it faced only smaller parties, and secured a majority in all but one. The election campaign was hardly visible. Turnout was low, averaging 22%. Some outgoing mayors said that they would not respect the results, and would continue to stay in office. Complaints on irregularities were received from 40 municipalities, but all were rejected by the electoral commission.

Dr Macaj considered what the government had aimed to achieve by holding these elections. Amongst other objectives, it sought to maintain its legitimacy by holding the elections on schedule. On the other hand, if the objective of Albania is accession to the EU, the elections were evidently a step back. In October 2019 the EU declined to take forward Albania’s (and North Macedonia’s) candidacy at the present time. Comment from the audience suggested that that was more a question of France grand-standing and further delaying enlargement.

The seminar also considered the role of the OSCE in observing the election. The OSCE monitors had done their best in difficult circumstances.