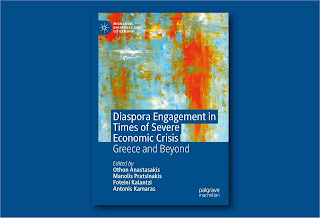 On Tuesday 8 November 2022, SEESOX, in cooperation with the European Studies Centre, convened a discussion entitled Diaspora engagement in times of severe crisis: A European comparative perspective, with Othon Anastasakis (Director, European Studies Centre) and Manolis Pratsinakis (COMPAS, Oxford) appearing as speakers. Contributing author Irina Laphsyna (Ukrainian Catholic University) delivered a presentation on her chapter, and Maria Koinova (University of Warwick) offered her comments on the volume. The event was convened on the occasion of the publication of the new book Diaspora engagement in times of severe economic crisis: Greece and beyond (2022, Palgrave Macmillan) by Othon Anastasakis, Manolis Pratsinakis, Foteini Kalantzi, and Antonis Kamaras.
The driving question of the new book is: how do severe economic crises impact diaspora-homeland relations? The present volume addresses this question by exploring diaspora engagement in Greece during the protracted post-2009 eurozone crisis. It looks at the crisis as a critical juncture in Greece’s relations with its nationals abroad. The contributors explore aspects of diaspora engagement, including transnational mobilisation, homeland reform, the role of diasporic institutions, crisis driven migration, alongside comparisons with other countries in Europe.

Anastasakis began the discussion with a general overview of the work. He situated the new wave of Greek emigration within the context of the 2009 economic crisis, the sharpest decline the country has seen since the 1930s. With a 25% decline in GDP and unemployment reaching 27%, the country introduced severe austerity measures. What followed was a wave of outward migration and severe brain drain, as public trust in the system plummeted.

He then outlined several sub-questions within the book. Firstly, to what extent, and in which areas, was the crisis a cut-off point and the catalyst for different modes of diasporic engagement? Secondly, what types of engagement do we identify and how do these differ from the pre-crisis ones? Thirdly, did the crisis result in missed opportunities or even disengagement between homeland and particular diaspora actors and cohorts? Finally, was the Greek crisis an exceptional and unique case, or is it generalisable and relevant to other similar or parallel interactions of homeland-diaspora engagement in Europe during the years of the financial crisis?The book follows multiple themes, including homeland reform, “new migration,” diaspora institutions, diasporic identities, and comparisons between diasporas. It also explores a number of case studies such as political engagement, human drain, philanthropic giving, and public diplomacy. Towards the conclusion of his presentation, Anastasakis highlighted new ways in which the Greek diaspora interacts with its homeland following the crisis. Particularly interesting was its importance to enabling voting from abroad, but other effects included the changing dynamics of transnational philanthropy and the creation of new economic networks.

Pratsinakis’ presentation provided a comparative view of the phenomenon, drawing comparisons and contrasts between Greece and other Southern European countries. Emigration from Greece steeply increased in 2010, reaching over 60,000 at its peak. These rates were similarly high in Portugal, but much lower in Spain and Italy. In fact, while emigration rates doubled in the latter two, they stayed below the EU average. In all these countries, the outflow of professionals was significant. The private sector shrank while the public sector was no longer an option due to cuts and restrictions.

He argued that in multiple important ways, structural conditions predated the financial crisis. Notably, Greece and Italy have the lowest rates of employment for young professionals in the EU. This is not due to an oversupply of educated people, as the share of people with university degrees is around the EU average. In reality, the labour market is simply failing to absorb new people and is plagued by nepotism and hierarchy.

He also highlighted the fact that people’s motivations for emigrating have changed. In the past, emigration used to be a positive career move, with most émigrés planning to eventually return. After the crisis, people began to leave because of their disappointment in the country’s management and the lack of economic prospects. This group is planning to stay abroad longer, even indefinitely.

Finally, Pratsinakis discussed the impact of emigration on diaspora-homeland relations. Firstly, the diaspora has become younger and more highly educated, contributing to Greece’s brain drain. Secondly, diasporic activism has increased, with the formation of new associations, an upsurge in protests against punitive austerity measures imposed on Greece, and growing solidarity with refugees at the peak of the so-called refugee crisis. Finally, the issue of emigration has become politicised in all four Southern European countries. For them, emigration symbolised economic and political decline, and opened discussions on how to sustain ties with the diaspora.

Lapshyna presented the most important findings of her chapter, which is on the Ukrainian diaspora in Europe. Her major contribution was the discovery that Ukrainian discourses on migration and the diaspora have changed significantly with Euro-maidan. Before this event, Ukrainians perceived their compatriots abroad as traitors and defectors, labelling émigré women as prostitutes and blaming them for the “degradation of the family” and male alcoholism. Emigration was associated with the spread of drug use and HIV/AIDS, and was also seen as a security threat. She explained these negative perceptions as rooted in Ukraine’s Soviet history, during which time contacts with foreigners were highly monitored and emigration fell under heavy restrictions.

Euro-maidan, however, changed domestic perceptions of the Ukrainian diaspora for the better. The population at home noted positively diasporans’ involvement in the uprising, as well as their defence of the country, and began to appreciate their contribution to the Ukrainian economy. The perception, Lapshyna concluded, has largely shifted from viewing diasporans as villains, to seeing them as goodwill ambassadors, investors, and lobbyists for Ukraine.

Finally, Koinova commented on ideas she found notable in the new volume. First, she praised the book’s use of critical junctures. She highlighted how the state’s inability to deal with its own engagements financially and administratively opened a space for new actors, and how the crisis facilitated the movement in support of voting from abroad. Secondly, she highlighted the book’s treatment of social remittances in north-north migrations. Not many works, she said, analyse the cultural effects of emigration in this way. Finally, she discussed polycentric governance, which has increased as the state has weakened. Not only the EU, but also diasporic organisations, philanthropists, and ship owners have become significant actors in Greek affairs.

In the Q&A, audience members asked about the implications of the state’s convalescence after the crisis. Anastasakis responded that a big mobilisation is under way to bring back the “brain drainers” or at least to try to work within the context of brain circulation. The Greek government is, at the very least, adopting a conscious approach to dealing with this problem.

Another question related to why émigrés are less prepared to invest in government initiatives in their home country. Pratsinakis responded that migration allows for disengagement from the state, and that many migrants prefer to engage with their families and friends rather than institutions. Anastasakis raised the point that money sent back to Greece was a drop in the ocean and that some diasporas were more likely to engage in community endeavours in their host countries.

One audience member noted with surprise that remittances went down after the crisis and were in fact outweighed by money flowing in the other direction. She hypothesised that Greeks sent their money to foreign banks, trusting them more than their local banks. Pratsinakis acknowledged this phenomenon, but also added that the sociodemographic makeup of the new emigrants plays a role. A significant number came from better situated families who had no immediate need for the money.

Another audience member asked whether people returned following the crisis and whether there is any meaningful circulation. She also proposed an alternative hypothesis for the phenomenon observed by Lapshyna: before Euro-Maidan, emigration was mostly confined to Ukraine’s Western oblasts, but the Russian invasion brought the experience of internal displacement and emigration to many more people. Pratsinakis answered that return rates continue to be low, with only 11% of respondents planning to return within a few years (and the same proportion actually doing so). There is, however, a large number of people moving back and forth. Lapshyna responded that many in Eastern Ukraine did have migration experiences moving to Russia, though their preferred destinations have recently changed. She appreciated the comment that migration has become a democratic experience, with migrants in Germany, for example, transferring social remittances back to Ukraine.

The discussants were also asked about their favourite discoveries. Lapshyna said that she was struck by how both old and new diasporas felt that they were living in a parallel world to the Ukrainian state. Their contribution is not appreciated, nor is there any expectation on the side of diasporans that the state will help them. She also noted that all classes of migrants are engaged in Ukrainian affairs, not just the high earners but also the undocumented. Anastasakis highlighted the influence that new migrants had on voting law reform. He also raised the issue of people reverting back to former ways of life upon returning to their home countries, for example by engaging in corruption.
Ladislav Charouz (ESC and SEESOX Research Assistant)
Posted by SEESOX at 12:55