North Macedonia: The logic of the solution

On the 15th of May, Nikos Kotzias, former Foreign Minister of Greece and Professor at the University of Piraeus, delivered a lecture entitled “North Macedonia: The logic of the solution” on the Macedonian name deal and how the two sides, the Greek and the then Former Yugoslav Republic of Macedonia, came to a successful conclusion. Having Nikos Kotzias, the main architect of the name deal from the Greek side as a speaker at SEESOX, was a rare opportunity to listen to his personal account of the opportunities, the challenges, the process, and the lessons learned that led to a final deal in one of the most intractable foreign policy issues of post-1989 Greece. 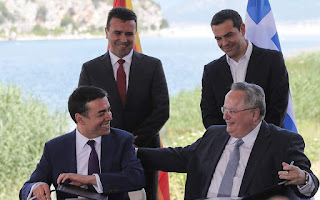 Kotzias began by dividing foreign policy approaches into “active” and “passive”, the former aiming at reaching conclusions to foreign policy problems, and the latter leaving matters open-ended. He then went on to argue that a foreign policy which tries to find solutions has to look for compromise, otherwise it ends up prolonging inactivity and becoming hostage to political cost. As Foreign Minister, Kotzias argued that he tried to pursue an active foreign policy on a number of lingering foreign policy matters including the Cyprus issue, Albanian historical bilateral disputes and the Macedonian name deal; it was in the last that he managed to achieve results and agree on a solution with the other side. According to Kotzias, the long-term inability to find a solution with Greece’s northern neighbour had led to a “lose-lose” situation between the two countries, allowing third parties to benefit from the situation at the expense of these two neighbours. Seen in this light, the Macedonian name dispute was becoming a matter of significant geopolitical weight, leading to Turkey’s intrusive role in the then FYROM, competition between the US and Russia over NATO membership, or the long-term fear of the dismemberment of the country.


The secret of success lay in building trust between two sides that had mistrusted each other for so long and therefore one of the initial moves was to bring about confidence building measures. The election of Prime Ministers Zaev, on the one side, and Tsipras on the other, was a great opportunity which allowed the two Foreign Ministers, Kotzias and Dimitrov to open discussions and exchange visits on a regular basis. During the course of the negotiations the name issue discussion was accompanied by other supplementary issues, including the divisions between nationality and identity, that of citizenship, or the issue of FYROM’s irredentism and appropriation of the ancient Greek past. The main aim was to create a positive agenda based on interests instead of rigid positions and avoid becoming a hostage of history. In the effort to build trust between the two sides, the two had to keep third parties such as the UN at a distance on several occasions, in order to avoid competition between the two countries in trying to bring the mediator onto their side.

Overall, the solution of the name dispute was a particularly difficult matter to resolve, because it involved a dispute over identity, which is an elusive issue amenable to rigid positioning and with significant resistance from both sides of the border, and was bound to create parliamentary opposition and social mobilisation in both states.  According to Kotzias, the thin parliamentary majority in favour of the agreement in both parliaments, the Greek and the North Macedonian, is a clear indication of the balanced nature of the deal, and reflects the culture of a compromise where both sides feel that they have marginally gained from it.
Discussion with the audience touched on questions such as: the reason for the particular choice of the name of North Macedonia (instead of New Macedonia or a Slavic name); the involvement of inter-party dialogue in Greece; or the impact and resistance of Russia to the name deal.