Greece in the post-memoranda era: What next?

The 2019 SEESOX Annual Lecture was given by Nikolaos Karamouzis, President of Grant Thornton, Greece, Former Chairman of the Board of Eurobank, Emeritus Professor at the University of Piraeus, and Chair of the SEESOX Hellenic Advisory Board. The lecture offered timely insights into the future of the Greek economy as it resurfaces after many years of EU and IMF memoranda and programmes. 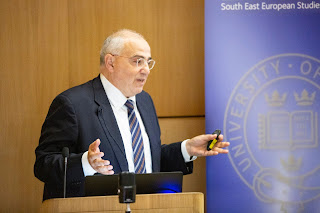 Mr Karamouzis first reviewed the Greek experience of the past few years. GDP fell from 250 billion euros in 2008 to only 185 billion now. The Greek crisis was of unprecedented depth, length and social cost, challenging social cohesion. Unemployment rose from 7% to 27%, private investment fell to one third of pre-crisis levels, and the population fell by half a million due to emigration and a decline in fertility rates. Poverty levels rose to above 30% on the EU’s measure.

Some of this could have been avoided. The competitiveness and fiscal crises were allowed to spill on to the financial side. Banks lost half their deposits—a bigger fall than in Argentina. There were three major capital increases, as capital of the banking system fell from 60 billion euros to zero. NPLs rose to 107 billion euros; even today they account for 45% of total portfolios. The Eurozone institutions stepped in twice, in 2012 and 2105, to keep the banking system working.
The first major cause of the crisis was the record fiscal deficit, at 15.1% of GDP in 2009. Debt rose to 130% of GDP before the crisis. It peaked at 180% during the crisis, and still is close to that level. The IMF says it is unsustainable; the European institutions have said that this can be determined in 10 years, and pushed forward decisions by reducing debt servicing costs for that period.

The second major cause of the crisis was the huge current account deficit, reflecting a deterioration in international competitiveness of 35% since 2001, as wage increases consistently outpaced productivity growth.

The third cause was the monetary explosion. 350 billion euros were borrowed, providing a credit expansion of 200% since 2001, over 18% annually.

Eventually the European Commission realized it had an atomic bomb on its hands. At the same time, by March 2010 Greece lost all market access. The EC needed to provide 280 billion euros support—the largest amount ever—plus an additional 160 billion support at the peak of the crisis.

Neither the markets nor the credit rating agencies provided any warning signals. Even in early 2010 the agencies were assigning investment grade standing. Markets continued to finance the credit explosion at very cheap rates. In 2007 Greece had issued a 50 year bond with a fixed coupon of 2%.

Mr Karamouzis had told Prime Minister Papandreou in late 2009 that Greece had only 100 days before the markets closed. He wondered why the government, the IMF, EC and ECB did not realize that this atomic bomb was about to explode. Partly this was due to false statistics, but the overall picture was visible. The European authorities ignored the signals.

Why did the crisis persist so long? There were 10 mistakes:

1. The Greek government and society should accept responsibility for the crisis, and take the bulk of the blame. They had a unique opportunity to transform the economy, through borrowing at very low rates, as well as substantial EU support, but this was spent on construction, in particular residential real estate, not to transform the productive base of the economy. Greece remained the most closed economy in the EU, with a heavy state sector, and protected markets. Business got used to easy money and easy profits; the public became addicted to “an effortless way to paradise”, borrowing endlessly. There were strong special interests supporting public procurement and tax evasion. It was not accidental that when the crisis erupted Greece went into denial; each opposition party offered an easier solution. Finally, the strategy of confronting the creditors—as advised by two Nobel prize economists—did not pay off, especially in 2015.

2. Europe was not prepared to handle the crisis. Its institutional structure was a work in progress, with the various agencies (SSM, SRM, ESM, BRRD) new and not yet fully formed.

3. The creditors’ model was flawed and underestimated the fiscal multipliers; as a result, Greece missed its initial programme targets by miles. Indeed, the IMF has issued a paper accepting its mistakes.

4. Both sides used Grexit as a story to avoid compromise. In 2015 the Greek government talked about introducing a parallel currency, which destabilized the markets, causing a further major loss of deposits.

7. The European institutions resisted the early restructuring of Greek debt. There has been an amazing cut in Greece’s public debt-servicing requirement, but the debt stock today remains at 180%--45 percentage points of GDP more than before the crisis.

9. Negative wealth effects were not recognized in models.

10. The supply side was underestimated. All long run elements were negative: labour supply was declining and total factor productivity falling.

Mr Karamouzis then turned to the future. The Greek economy is now improving. GDP is growing at 2%, although 3-4% is needed. Unemployment is falling, although is still 18%. The adjustment in the fiscal balance has been amazing. For the fourth year running, Greece will have a primary fiscal surplus of over 4% of GDP. Productivity has risen 20%, and exports of goods and services by 18%.

This is still not enough. Household savings have collapsed, and are negative. FDI should be a priority. Structural reforms are still needed for stronger growth. Capital controls have been eased, but are still in place. NPLs are around 45%. The private investment to GDP ratio is in single digits, which is not sustainable. The way out has to be a growth strategy resting on increasing exports and FDI, and creating fiscal space.

1. The government is committed to tough primary surpluses, but should renegotiate the targets because they are killing the economy. This should be in exchange for two pre-conditions: a) there would be front-loaded delivery of structural reforms, such as privatization; and b) a commitment that all fiscal space created would go directly to increase public investment or reduce consumer taxes.

2. Tax rates are out of control. Greece has the highest tax rates in Europe. VAT and property taxes should be reduced. These should be rebalanced by accelerating privatization, including a programme to commercialize the huge holdings of public land. Inefficient public corporations should be shrunk, the use of cash should be abolished for all corporations; with VAT evasion estimated at around 5 billion euros this would provide scope to lower taxes. Tax evasion by the professional classes should also be addressed.

3. The problems in the banking sector should be addressed. Greece, for instance, borrows at 160 basis points more than Portugal, and 250 basis points more than the EU average. There should be a programme to reduce NPLs by 54 billion euros over the next two years; there is an asset management company, but this cannot replace a private solution for full resolution of the problem.

4. Reform the public administration. It is inefficient, with no incentives. Progress to date, under creditor pressure, has been slow.

5. Create a friendly framework for foreign investment, which at present is below the OECD average. It is ridiculous, for instance, to have 10% of the world shipping market, and yet not have a university that specializes in shipping.

6. Reform of the energy sector, which otherwise will be the next problem.

7. Establish credibility. Markets are still skeptical of Greece. If interest rates could fall by two percentage points, this would give a major boost to confidence. The government should look to constitutional changes to secure the fiscal position and adherence to a market economy.

8. Put together a plan to increase exports rather than consumption. Consumption is still 68% of GDP, the highest of any country in the Eurozone.

Further discussion included questioning whether Greece really has yet emerged from its crisis, given that debt and NPL levels look unsustainable; whether continuing high levels of defense spending, and concomitant procurement issues, might provide a further opportunity for adjustment; and whether there are inherent problems for countries such as Greece in the euro framework, given that policies are likely more weighted to the interests of countries such as Germany.