The Cosmo-Politics of nostalgia: Istanbul, identity, and difference 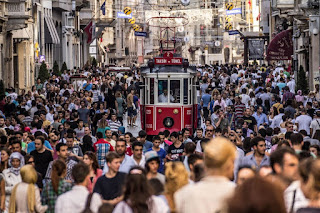 On 13th May 2015, Nora Fisher Onar, a fellow at the Transatlantic Academy in Washington and Research Associate of the Centre for International Studies at the University of Oxford, gave a talk about “The Cosmo-Politics of Nostalgia: Istanbul, Identity, and Difference”.

She started off by explaining the benefits of Istanbul as a case study for advancing some of the central questions raised in the literature on cosmopolitism. The latter include: (a) the relationship between nation states and minorities within them; (b) the relationship between liberal or secular majorities and religious minorities, following the implicit assumption that one indeed has such a constellation in a cosmopolitan society; and (c) the relationship between universal rights and multiculturalism. For all these questions, she argued, Istanbul offers important insights, inter alia due to its history of being the capital of different empires and the existence of various minorities. Furthermore, we can understand Istanbul as a microcosm of Turkey’s development, as well as the development of other major cities worldwide, which gives it a clear cosmo-political dimension.
The major focus of her talk was the relationship between the secular and the religious minorities and majorities (point b). In this respect, the experiences of Turkey and Istanbul reverse the general cosmopolitan assumption of liberal or secular primacy; rather, the question becomes how religious majorities interact with liberal minorities, for liberals are a small, elite group within a heterogeneous minority that collectively stands in relation to the religious majority. The identities and views of the religious majority, as represented by the homo islamicus in an ideal-type manner, and the liberal/secular minority, represented by the homo liberalis, share according to Fisher Onar a common feature: a specific sense of what she termed “nostalgia” for the Ottoman past, i.e. the cosmo-politcs of a different era. Nostalgia, a term originating with Swiss mercenaries to describe the painful longing for home, has since proven useful to capture other societal functions. In Fisher Onar’s understanding, it gives the individual a sense of self, of community, and a sense for the qualities that one longs for in one’s own community as opposed to other communities.

Yet while both the homo islamicus and the homo liberalis exhibit a specific sense of nostalgia for the Ottoman past, a careful analysis reveals that these two groups are in fact nostalgic about different aspects of said past. For the homo liberalis, the reference point is the 19th century millet system that has been transformed into a system that guarantees an equal playing field for Muslims and non-Muslims alike. In other words, the position of the individual underwent a transformation from subject to citizen. The homo islamicus, on the other hand, is nostalgic about the era of the Ottoman conquests by Mehmed the Conqueror or Suleiman the Magnificent. The individual is supposed to subject himself, meaning that the group mediates his needs.

Having outlined these two ideal types and connected them to contemporary iconography, festivities, architecture, and design, Fisher Onar moved on to explain the major problem with this kind of dichotomy, namely that ordinary people do not exclusively subscribe to either one of these viewpoints. This is why she tries to challenge both viewpoints by arguing for a better understanding of practical accommodation because, in practice, people playfully combine different aspects of both (and more) viewpoints. For her, this concept, termed homo lundens, is a much more promising starting point for analysing the challenges of cosmopolitism than either the liberal, the religious, or the nationalist dimension by themselves.

One aspect of the framework, which raised questions from the audience, was the usage of the term nostalgia that appeared to exhibit some romanticism and neglect the pain contained in being nostalgic as well as possible conflicts that may emerge. Furthermore, the audience wanted to know more about the interplay between the different actors belonging to the two categories as well as the third. These, and other questions, will be the included in Fisher Onar’s future research.
Posted by SEESOX at 16:34