All the President’s Men: Institutions and key players in Erdogan’s Turkey 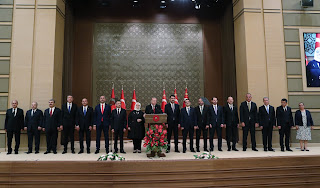 This SEESOX seminar was held on 3 November in the European Studies Centre of St Antony’s College, Oxford. The speaker was Selim Koru (Economic Policy Research Foundation of Turkey), the discussant was Sinem Adar (German Institute for International and Security Affairs), and Dimitar Bechev (Oxford School of Global and Area Studies) chaired.

Bechev opened proceedings by noting that the Erdogan system was currently in trouble. It had run out of ideas and was failing on economic policy. The Opposition had learnt lessons in local elections and was now preparing for 2023 elections. Erdogan was no longer an unstoppable power.

Koru said that Erdogan rule was approaching its natural end. What had happened in the past 20 years, and where would Turkey go? Turkey after the AKP rise to power in 2002 had become an early version of a global tendency towards populism. It combined the far right rhetoric of civilisational change with sharp changes in economic/capital structures, bringing together an alliance of islamists and nationalists, and claiming to restore social harmony, economic success, and military glory. Today, although there was economic growth, there was inflation of 40-50%, and a catastrophic fall in the value of the lira. In the cities, there was a mix of two worlds: restaurants were full, but bus users worried about affording the fare. Istanbul especially was feeling acute economic pain. The Erdogan rating level was down to 40%, and going to get worse. Polls suggested that the governing coalition and opposition coalition had 40% each, 10% Kurdish, and 10% smaller opposition parties. It would be dangerous for Erdogan to hold elections, and unlikely that he would: though he presented himself as embodying the nation (“divinely ordained sovereignty”).Was there a more efficient way for AKP to govern? Erdogan had been successful over 20 years, and shifted the country to the right. But he was poor in policy making and crucially had not created the government apparatus to create new policies. This had helped lead to current inequalities. For a time the Gulen movement provided a “parallel hierarchy” to appoint key people to major roles in state. But after the big falling out in 2013, and a purge by Erdogan, this parallel role was taken up by other informal networks (religious groups, organised crime, nationalists) who controlled public sector job and eroded trust in state institutions. The opposition were beginning to replicate key elements of AKP success, eg by moving to the right.

Ader posed four basic questions: what were the external dynamics; to what extent could Erdogan control the informal networks; what were the relations between informal and formal structures; were ‘old state’ structures resisting the AKP?

Koru said that Erdogan wanted this period to focus on geopolitics and foreign policy (plus hi tech). There was a basis for Turkey to have a wider basis for foreign policy; the nexus between Balkans/N Africa/ Central Asia. They had authoritarian leaders too. Erdogan had recently been in Africa,, setting trade goals. But internal failures made this hard to pursue. Syria was very important in the creation of a “new Turkey”; first significant cross border operations, talks with Russians, Iranians. Turkey was to develop a strategic approach to the wider world. US initially seemed to support this (pipelines, e.g.).

The Q&A session developed many of these themes: AKP as an ideological movement; were relations with Russia pragmatic or was Turkey moving into Russian spheres of influence? Would Erdogan go quietly if he lost the elections? Did opposition and particularly CHP have a clear alternative vision to Erdogan? The role of opposition Mayors? Turkey developing trade with former USSR states on basis of elite relationships. A few construction companies “owned” different countries through the “gift” of Erdogan. Climb down over 10 ambassadors indicated an intense conflict within the Turkish state, and nascent discord within the bureaucracy and within AKP. Role of army today: Army had historically key role, but no longer owned policy areas Could the government course- correct: given the lack of policy-making abilities it was a genuine problem to work more efficiently. Could AKP survive /emancipate itself from Erdogan? Probably not, but it could fracture. Erdogan’s health was a big source of speculation . Turkish foreign policy lacked any strategy and was purely tactical. Blurring of foreign and domestic policy meant that tensions in E Med could be linked to domestic difficulties. The F-16 issue might open way for move away from West :but had serious implications for national security and the role of the military.

Bechev asked how we saw Turkey 20 years from now? Koru said that the Erdogan government was fundamentally reactive. It put forward western model as preferred goal initially, but then sought to create the opposite. The need thereafter was to explore new type of politics that looked at solutions which responded to Turkish specificities. Adar said that she was a little bit more optimistic now than a few months ago.