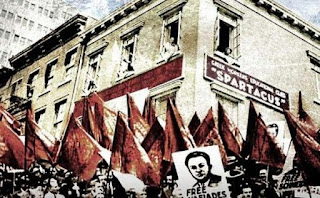 At an event on 4 November 2015 chaired by Othon Anastasakis (St Antony’s College), this year’s A.G. Leventis Visiting Fellow at SEESOX, Kostis Karpozilos presented the 2013 documentary ‘Greek-American Radicals. The Untold Story.’ The film, which is partly based on Karpozilos’ own research and for which he acted as a screen writer and historian, documents the story of Greek immigrants to the United States that were active in the radical-left movements, ranging from the early 20th century until the McCarthy era.

The story of Greek-American radicals is so far not well known, as the US is hardly ever associated with strong leftist policies. Quite to the contrary, when people in Greece think of their compatriots in the States, they often assume that these must have been successful businessmen, engaged in the American way of life and pursuing the American dream. Yet while their numbers might not have been large, Greek immigrants nevertheless contributed significantly to the leftist movements.

As the movie convincingly shows, almost all Greek immigrants –– like most immigrants that reached America in the early twentieth century –– worked in factories for wages, whereas only few actually owned small businesses. The generally harsh working conditions prevailing in the 1920s made these workers naturally prone to radical-leftist demands and the Greeks soon got involved in the larger workers’ movement as well as the formation of labour unions. The Great Depression aggravated the working situation and ultimately led to Franklin D. Roosevelt’s New Deal. It was this set of reforms that actually politicised the immigrant communities in the sense that they became active players in US domestic politics. The reforms were generally welcomed but they were also accompanied by large-scale union protests, in which many Greek immigrants participated. A number of radical Greek-Americans were also actively involved in the Spanish Civil War.

During World War II, members of the Greek community operated as ‘unofficial ambassadors’ of the subjugated nations and supported the National Liberation Front. Towards the end of the war, their focus shifted to the situation in Greece. After the war had ended, the general configuration of the Greek American community changed. Some of its members had by now done well economically and owned small businesses once again. Consequently, they left the radical movement, while others still pushed for leftist policies. The latter ran into massive problems once the Cold War started and US Senator McCarthy began his hunt for communists. Many Greek-American radicals were questioned, imprisoned, and deported from the United States.

As Kostis Karpozilos explained during the Question and Answer part of the seminar, the movie was well received in Greece, especially since many people made the obvious connection between the effect of the Great Depression on the radicalisation of the workers and the coming into power of the SYRIZA government in the wake of the current economic crisis in Greece and the European Union. Karpozilos also explained that while the Greek-Americans were involved in the larger workers’ movement, their ethnic community always remained an important point of reference for their politics and every day experiences. And even after the Greeks got interested in domestic US policy in the 1930s, they still followed the developments in their home country very closely.

The goal of the documentary was to present a counter-narrative to the more common perception that there was no left movement in the United States and the general claim that all Greek immigrants there had been capitalists. It was precisely their immigrant background that led to their engagement in industrial labour and their involvement in labour unions; immigration and the fight for worker’s interests went thus hand in hand. In fact, as Karpozilos reminded the audience in the beginning of the talk, the poem engraved on the Statute of Liberty contains the verses ‘Give me your tired, your poor, / Your huddled masses yearning to breathe free, / The wretched refuse of your teeming shore.’ Similarly, the American version of ‘The Internationale’ contains the verse ‘Arise, ye wretched of the earth!’. From this point of view, it seems hardly surprising that the immigrant experience in America should be closely connected to the rise and fall of the radical left.
Posted by SEESOX at 12:18